Loretta Lynn Sends Birthday Message To Betty White: “We All Adore You” 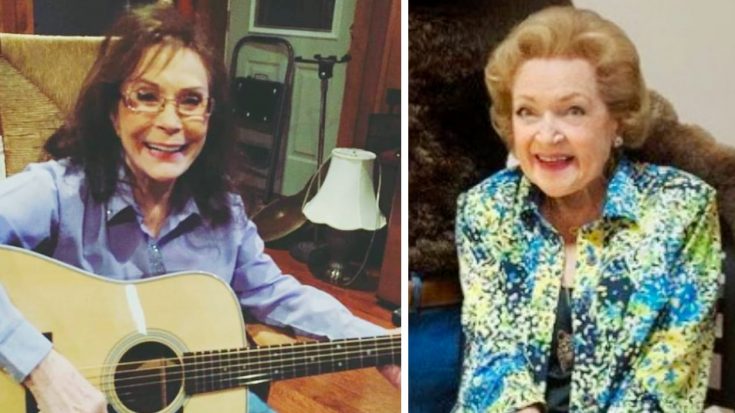 Beloved actress Betty White celebrated her 99th birthday on Sunday (January 17). Back in 2018, White told Parade the key to living a such a long existence was to “Enjoy life.” She also gave credit to vodka and hot dogs, which she said she loved “probably in that order.”

Because of the current world environment, there couldn’t be a big party to celebrate White’s birthday. So she told ET how she planned to celebrate it instead:

“You probably didn’t ask, but I’ll tell you anyway. What am I doing for my birthday?…I am working on getting The Pet Set re-released, and feeding the two ducks who come to visit me every day.”

The Pet Set is a series White hosted about celebrities and their pets. Carol Burnett, Doris Day, and James Stewart were among the many famous faces who introduced their furry friends on the series.

At age 99, White is still going strong. Another famous figure who can relate to the “never retire” mentality is country music legend Loretta Lynn.

At age 88, Lynn is gearing up to release a new album later this year, titled Still Woman Enough.

Lynn knows exactly what it’s like to be considered “old” while still feeling young at heart. So she wanted to reach out to White and wish her a happy 99th birthday.

“I’ve always loved her. 99 and doing fine—an Inspiration to all us young girl! Thank you, Betty and happy birthday. We all adore you.”

Lynn also included a few hashtags in her post, including “#wedontretire.”

Want to learn more about White? Check out the video below to hear 15 fun facts about her.

We hope White had the happiest of birthdays. Here’s to many more!