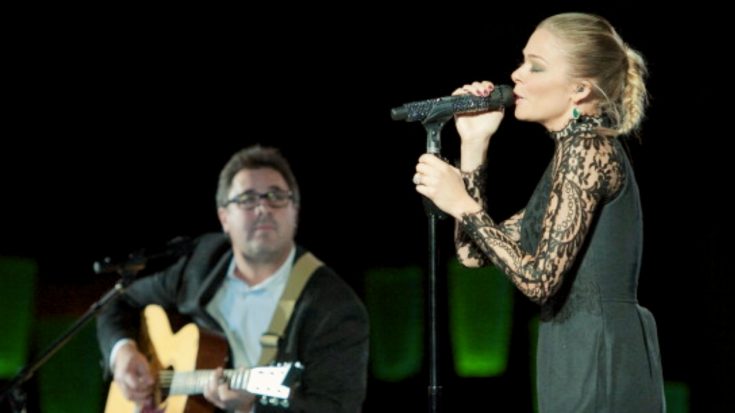 In 2011, LeAnn Rimes released her most unique album to date. Titled Lady & Gentlemen, the album featured Rimes’ renditions of famous country hits, all of which were made famous by male artists.

Rimes took the songs and made them her own by singing them from a female perspective. Because of this, she often had to change the lyrics to fit her female voice, as she did in her rendition of John Anderson‘s classic “Swingin’.”

The creative album was co-produced by Rimes, who also had a little help from another big name country star.

It turns out that Vince Gill was also one of the record’s co-producers, as was songwriter Darrell Brown. Since Gill was involved, it only made sense for Rimes to cover a song of his on her album, and she chose one of his best.

The song we’re talking about is “When I Call Your Name.” Co-written by Gill, the song was released in 1990 and climbed as high as the second spot on the Hot Country Songs chart. Gill went on to win a Grammy Award for his performance.

After more than two decades, “When I Call Your Name” remains a country fan-favorite. That’s why it can be challenging for other artists to take it on, but Rimes was up for it.

Instead of keeping the song in the exact same style as Gill’s original, Rimes opted to give it more of a blues-infused tone. Such a style seems fitting, since the song serves as the narrator’s reflection after discovering their lover has left them.

As the years have passed, Rimes has never shied away from changing the style of classics to make them something new. She’s even done so with her own songs, reimagining hits such as “One Way Ticket” and “Blue.”

Get Ready To Be Mesmerized

While Rimes’ rendition of “When I Call Your Name” may be blusey, it’s anything but subdued. It does have its more gentle moments, but the track also serves as a springboard for Rimes to showcase her powerful range.

She shows hints of these powerhouse moments as she sings the verses, but the real kicker comes when she hits the chorus. As you listen, you’ll be dazzled by how she uses the power of her voice to convey the deep and painful emotions buried within the song.

Go ahead and check out the full audio clip for Rimes’ version of “When I Call Your Name” below. You know that it has Gill’s stamp of approval, since he co-produced the record!