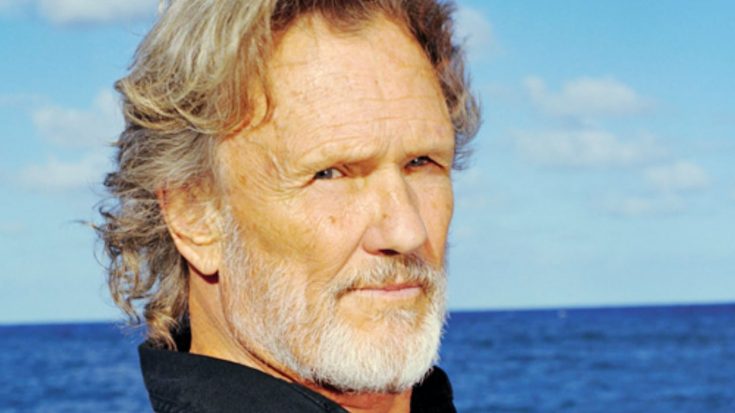 Earlier this week, the CMA announced that Kris Kristofferson would be the 2019 recipient of one of its most prestigious awards…The Willie Nelson Lifetime Achievement Award.

The award has been given out every year since 2012. It is bestowed upon an artist that has made a huge impact on country music history, much like Nelson himself.

Nelson was the inaugural winner of the award. In the years that followed, it was given to artists such as Dolly Parton, Johnny Cash, and Kenny Rogers.

Now, Kristofferson can add his name to that list of legendary figures.

This will be the singer/songwriter’s second CMA Award. His only other one was given to him in 1970, and was for Song of the Year for writing Cash’s “Sunday Morning Coming Down.”

Since Kristofferson is receiving such a monumental award, the CMA put together a tribute performance to honor him during the ceremony.

It was announced that Dierks Bentley, Sheryl Crow, Chris Janson, and Josh Osborne from Brothers Osborne will take to the stage at the 2019 CMA Awards on November 13 to honor Kristofferson with a musical tribute. They will be singing his iconic song, “Me and Bobby McGee.”

The track was written by Kristofferson and later made famous by Janis Joplin. Over the years, it has been covered by numerous country music stars, including Waylon Jennings and Reba McEntire.

Now, those who tune in to the CMA Awards will get the chance to hear another rendition of the song.

This is "good enough for me and my Bobby McGee!" @DierksBentley will hit the #CMAawards stage next Wednesday with @SherylCrow, @TheChrisJanson and John Osborne (@JingleJohnOsborne) to honor our 2019 Willie Nelson Lifetime Achievement Award recipient – the iconic Kris Kristofferson!

But if you were hoping to see Kristofferson join those artists on stage to sing the iconic song he wrote, you may be disappointed by this next bit of information. Even though Kristofferson is receiving the Willie Nelson Lifetime Achievement Award, he will not be in attendance to accept it at the ceremony.

Rolling Stone noted in its article about Kristofferson receiving the award that he will be unable to attend the CMA Awards this year.

Kristofferson has been performing extensively all year, and happens to already have a show scheduled on the night of the CMA Awards in Davenport, Iowa. It seems he is choosing to honor that commitment, rather than reschedule so he can attend the CMA Awards.

While we are sad to hear that we won’t see Kristofferson at the CMA Awards this year, we understand his reason. Those who get the chance to see him at his live show will be in for a real treat, because he is an extraordinary artist.

Congratulations to Kristofferson on being named the 2019 recipient of the Willie Nelson Lifetime Achievement Award!