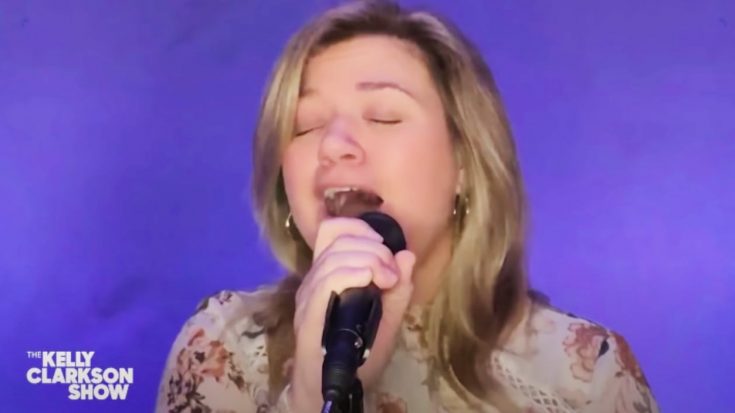 No genre is off limits when it comes to the “Kellyoke” segment of Kelly Clarkson‘s talk show. She has performed a nice mix of pop and rock, along with a little country every now and then.

Just a few of the many country songs Clarkson has covered for “Kellyoke” include Deana Carter‘s “Strawberry Wine,” Lee Ann Womack‘s “I Hope You Dance,” and Travis Tritt‘s “Here’s A Quarter.”

For another “Kellyoke” segment, Clarkson chose one of Rascal Flatts‘ Top 10 hits…their 2001 single “I’m Movin’ On.”

Written by Phillip White and D. Vincent Williams, “I’m Movin’ On” is narrated by a man who is ready to put his old life behind him. He expresses a desire to move away from where he lives, singing, “I never dreamed home would end up where I don’t belong.”

While the song isn’t explicitly about a breakup, it can certainly be taken that way. Rather than simply talking about wanting to leave his past behind, the man could be expressing a desire to leave because he wants to separate himself from the memories of the one he loved.

Either way you interpret it, “I’m Movin’ On” tugs at the heart. Rascal Flatts’ Jay DeMarcus once said, “That’s a song that just drains everything out of you.”

Because “I’m Movin’ On” is such a heavy song, anyone who tries to sing it has to connect to its emotions. Beyond that, the singer then has to sincerely portray those emotions through their performance.

That’s exactly what Clarkson did when she covered the song for “Kellyoke.” Her performance wasn’t lacking an ounce of passion, as she tapped in to the song’s pain and brought it out in her delivery.

Tune in to the clip below to see and hear how Clarkson performed “I’m Movin’ On.” We feel like this is one of her best “Kellyoke” performances to date.

Which other country songs would you like to hear Clarkson perform in the future?