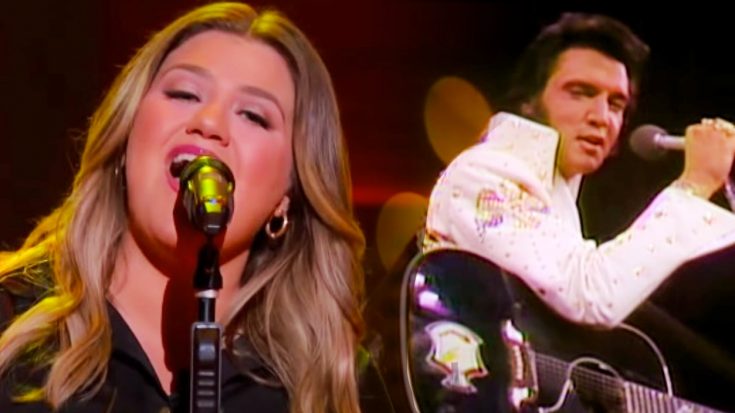 Elvis Presley has to be one of the most frequently covered artists in all of music history. His songs have been performed and reimagined so many times, these days anyone who wants to cover him has to do something truly special to stand out.

That’s exactly what Kelly Clarkson did when she delivered a cover of Elvis’ 1972 hit, “Burning Love.”

Kelly shared her cover of “Burning Love” during the “Kellyoke” segment of her talk show, The Kelly Clarkson Show. Though this wasn’t the first time she covered one of Elvis’ songs. She previously sang “Can’t Help Falling in Love” and “Heartbreak Hotel.”

Clearly, Kelly is an Elvis fan!

Instead of singing “Burning Love” exactly like Elvis, Kelly added a bit of flair to make it her own. The biggest change she made was the addition of multiple runs throughout the song. These gave her the opportunity to show off her range while playing around with the song’s style.

Most people in the YouTube comments and on social media gave Kelly’s cover their stamp of approval:

“…her vocal range is incredible!” one fan wrote on Twitter.

“Wish more Elvis songs would be sung today!! Thank you, Kelly you smoked it!!” someone wrote on YouTube.

Another YouTube commenter said, “Yes with the vocal gymnastics,” alongside a flame emoji.

Now it’s time for you to see what all of the fuss is about by watching Kelly’s cover of “Burning Love” in the video below!