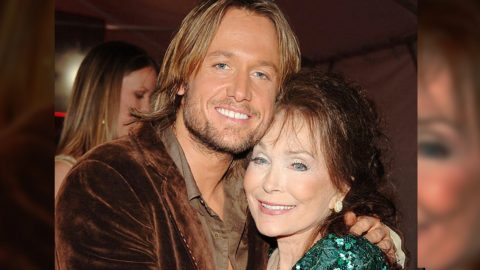 Bridgestone Arena in Music City was the place to be Monday night (April 1). Country music’s biggest stars came together to celebrate the upcoming 87th birthday of the Coal Miner’s Daughter, Loretta Lynn.

Garth Brooks, Trisha Yearwood, Alan Jackson, George Strait, Little Big Town, Miranda Lambert and many more shared the stage for the well-deserved celebration. The night was a special one for many reasons, the greatest reason was perhaps because it was the first birthday party the Country Music Hall of Famer has had in her lifetime. “I am so excited to celebrate my 87th birthday with all my friends,” Lynn said during the press conference announcement for the epic party. “This is the first time I’ve ever had a birthday party! My birthday wish has come true.”

But, a party wasn’t the only wish Loretta had. She revealed in January that she also wanted Keith Urban to jump out of her birthday cake. During Monday night’s birthday bash, Urban obliged. During her star-studded birthday celebration, “Burning House” singer Cam led the crowd in singing “Happy Birthday” to Lynn as a giant cake was rolled out onto the stage. As the song concluded, Keith Urban jumped out of the cake, much to the delight of the audience.

Miss Loretta- you asked me to jump out of a cake for you- and I would do it again every time ! Thank you for a truly surreal and gorgeous night of music , heart, stories , magic , and LOVE!!!!! HAPPY BIRTHDAY !!!!
Love ALWAYS. – KU
?: @ShearerPhoto pic.twitter.com/wZC4T5lchJ

Lynn has made a mark on country music that few women have. With a career that has spanned roughly six decades, Loretta is considered the most awarded female country artist in history. She was also the first female artist to win CMA’s Entertainer of the Year Award (1972).

Loretta Lynn’s star-studded 87th birthday party not only paid tribute to Lynn’s success, but also served as a fundraising event for the Opry Trust Fund, an organization whose mission is to help those in the country music industry when they need it most. More than $2 million dollars have been distributed by the fund to help those in the community with medical bills, living expenses, utility bills and more.

Lynn will officially turn 87-years-old on April 14th. Comment below to wish her a Happy Birthday!