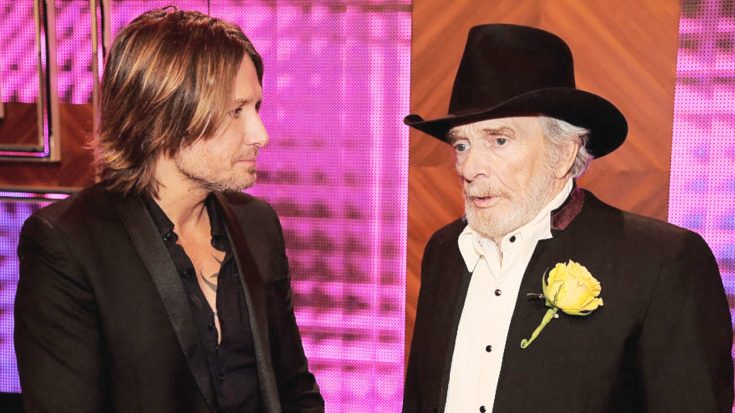 That track was “Mama Tried,” which arguably has one of the most recognizable guitar riffs in all of country music. Keith’s vision was to take that guitar riff and use it as the framework for “Coming Home,” which is exactly what he did.

But since Merle passed away in April 2016, Keith felt there was one thing he had to do before he put his vision to tape. He wanted to get the blessing of Merle’s family.

Keith described how important he felt it was to ask for a blessing before he moved forward with sampling “Mama Tried” in his new single:

“I called [Merle’s widow] Theresa Haggard and [Merle’s son] Ben Haggard to play them what we’d been working on,” he said. “It was important to me to have their blessing — and I’m so grateful that they love the song.”

Wanting to recognize Merle’s contribution, Keith credited him as a songwriter on “Coming Home.” His decision to do so has resulted in Merle being able to accomplish the impossible…earning a number one hit after death.

On Monday (August 6), Keith shared the happy news that “Coming Home” had just hit number one. While Keith was obviously excited over what this meant for his own career, he was even more overjoyed that he helped Merle earn another chart-topping hit.

Remarkably, “Coming Home” marks the first time Merle has earned a number one hit as a songwriter in 31 years, something which Keith pointed out.

“What hits me the most about Coming Home reaching number 1 is seeing Merle Haggard receive his first songwriting number 1 since 1987,” he wrote. “Thank YOU to all the Haggard family!!”

The success of “Coming Home” has gone to show that Merle’s legacy will never die. As long as there are other artists like Keith who love and share his music, country fans will always remember him.

You can listen to the song that helped Merle earn his latest number one hit by checking out the video below.

A huge congratulations to Keith, the Haggard family, and all involved in the creation of this song!