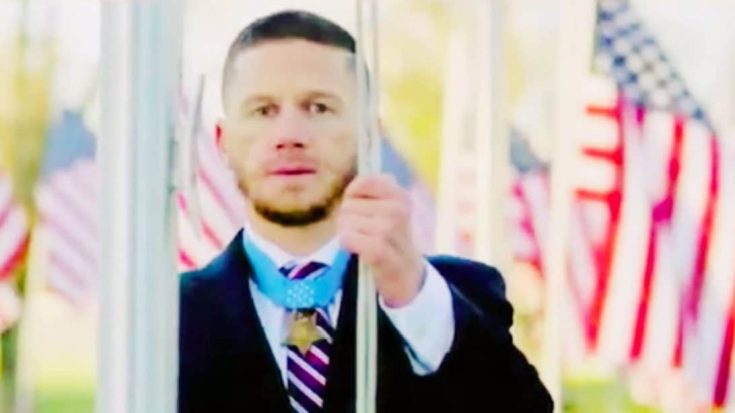 The Watergate Scandal, which resulted in the resignation of President Richard Nixon, created a time of turbulence in the USA. This trying time inspired Johnny Cash to write a song, and that song became what we now know as “Ragged Old Flag.”

Released in 1974, “Ragged Old Flag” is done in a spoken style, as Cash serves as the story’s narrator. He talks about meeting an old man outside a courthouse, and the man starts talking about their tattered flag and all it represents.

He discusses the many battles and wars the U.S. had been through at that point, discussing how the flag has been shot, stabbed, and burned, yet remains a symbol of strength.

To sum it up, the man says he is “mighty proud of that ragged old flag,” and says it should be treated with respect.

“Ragged Old Flag” was a fairly popular song, and claimed the 35th spot on the country chart. But its legacy has gone far beyond The Man in Black’s lifetime.

Prior to Super Bowl LI in Houston, Texas in 2017, FOX aired a spot that featured “Ragged Old Flag.” The video was as patriotic as they come, and was praised by viewers for celebrating the U.S. and its flag.

When 2020 rolled around, it was once again FOX‘s turn to air the Super Bowl. Just like it did in 2017, the network paid tribute to the American flag before the Big Game, and “Ragged Old Flag” was used in the video.

The video seems to serve as an updated rendition of the 2017 tribute. This time, we see “The First Ladies of the NFL,” the women who own NFL teams across the nation.

But the person with the most prominent role is Kyle Carpenter, the youngest living recipient of the Medal of Honor.

If you need a reason besides the game, commercials or halftime show to tune in to tonight's Super Bowl, here it is: Mississippi native and Medal of Honor recipient Kyle Carpenter is going to be honored. https://t.co/KFToTyZ1fU

The clip is a patriotic celebration of all the U.S has been through since inception. It also pauses to honor those we’ve lost, particularly the victims of the 9/11 attacks.

Families of 9/11 victims are seen in the tribute, and the video ends at the 9/11 Memorial in New York City.

We’d go on describing the tribute for you, but think it’s best if you witness how it unfolds by tuning in to the video below. And if you already watched the video during the Super Bowl, then you know it’s worth seeing a second time.