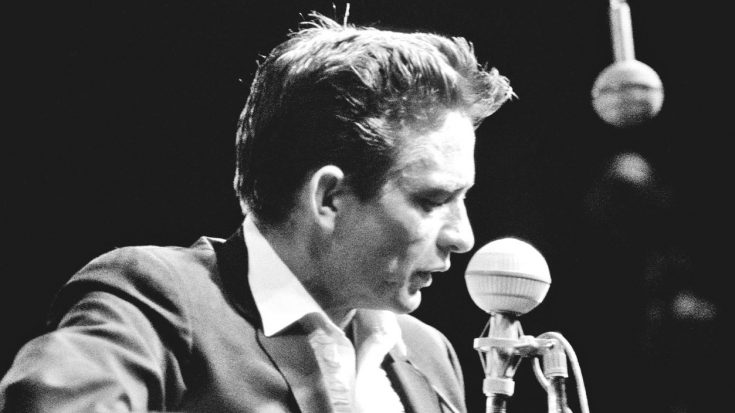 While a singer’s vocals typically reign supreme over any recorded song, the instrumentals certainly enhance their performance.  If a singer is ever forced to perform a piece with fewer musicians backing them, the difference in sound can be extreme.

One country song known for its instrumental sounds is Johnny Cash‘s “Ring of Fire.”

Written by Merle Kilgore and Johnny’s future wife June Carter Cash, “Ring of Fire” was a number one country hit for Johnny and a crossover success. It didn’t take long at all for it to be viewed as one of his signature songs.

“Ring of Fire” was first recorded by June’s sister, Anita. After hearing her rendition, Johnny made it clear that he wanted to give the song a shot once he saw how Anita’s version performed.

The San Diego Union-Tribune quotes him as saying, “I’ll give you about five or six more months, and if you don’t hit with it, I’m gonna record it the way I feel it.”

Johnny Had A Vision

Johnny claimed that he had a dream in which he heard “Ring of Fire” along with the sound of mariachi horns. So when he finally got the chance to record the song himself, he had those horns added to his recording.

It was a huge change to his usual sound, but it obviously paid off.

Since the horns are such an important part of “Ring of Fire,” you can bet that the song sounds different without them or the other instrumentals. Have you ever wondered what it would sound like if you stripped all of those instruments away? Well wonder no longer.

Johnny’s isolated master vocal track for “Ring of Fire” surfaced in a clip that was shared on YouTube. The audio clip has a bit of an eerie edge, since it is filled with an abundance of silence where we’re used to hearing instrumentals.

Then Johnny’s voice emerges out of the silence, just as powerful and electrifying as ever. As you’ll soon be able to tell, his vocals sound far more haunting than they do in the  finished recording. From the first word Johnny sings to the last, you’ll find yourself covered in goosebumps while listening to his master track.

It’s interesting to hear “Ring of Fire” in this way, since it’s so drastically different from the recording we all know and love. But it’s different in a good way, as it shows us just how talented Johnny truly was. This recording reveals that he was more than capable of holding the song on his own. Such a thing can’t be said for all singers.

Go ahead and check out the audio clip containing Johnny’s isolated “Ring of Fire” vocals below. It sizzles with a sound that is sure to burn its way into your memory.