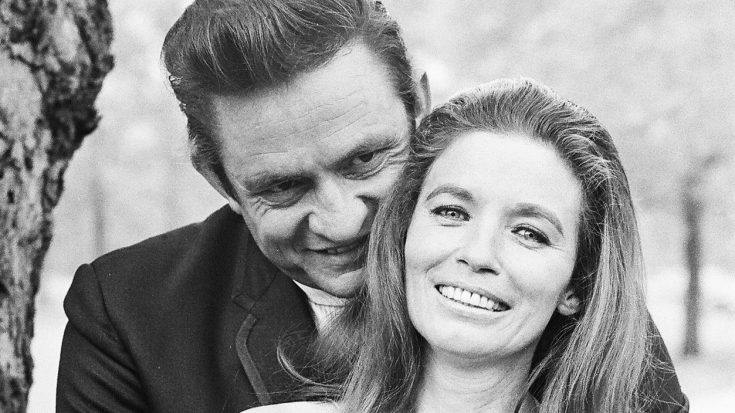 Johnny and June Carter Cash are regarded as one of country music’s greatest power couples. In addition to having their own successful careers, Johnny and June often paired up for performances and toured together throughout their 35-year marriage.

The couple met for the first time on July 7, 1956, when they ran into one another backstage on the day Johnny made his Grand Ole Opry debut.

June was also performing that day, after wrapping up a tour with Elvis Presley. While she was out on the road, she became a fan of Johnny’s music, with his single “Walk the Line” being released earlier that summer.

How Fate Brought Them Together

It turns out Johnny was a big fan of June as well. He had grown up hearing her sing on the radio with her family and popular singing group, The Carter Family.

When the two of them ran into one another backstage, both of them were starstruck, and Johnny reportedly said, “I’ve always wanted to meet you,” to June, and she responded with, “I feel like I know you already.”

June and the entire Carter Family eventually joined Johnny on tour, and performed with him throughout the years. Both Johnny and June ended up divorcing their former spouses, and eventually started a relationship.

At the conclusion of the performance, Johnny decided to propose to June on stage, asking her in front of the entire crowd if she would marry him.

Years later, during an interview on The Mike Douglas Show on March 3, 1981, Johnny recalled the proposal:

Taking Off Into Forever

Despite June’s hesitation to accept Johnny’s proposal, the couple didn’t wait long before they officially tied the knot. They were married a week later on March 1, 1968 in Franklin, Kentucky.

The couple welcomed their only child together, John Carter Cash, two years later on March 3, 1970.

Johnny and June remained together for 35 years, up until June’s death on May 15, 2003. But Johnny didn’t have to experience life without his beloved June for long, as he passed away only four months later, on September 12, 2003.

Today, Johnny and June’s legacy and love story lives on in the songs they sang, such as “Jackson,” which you can listen to below.