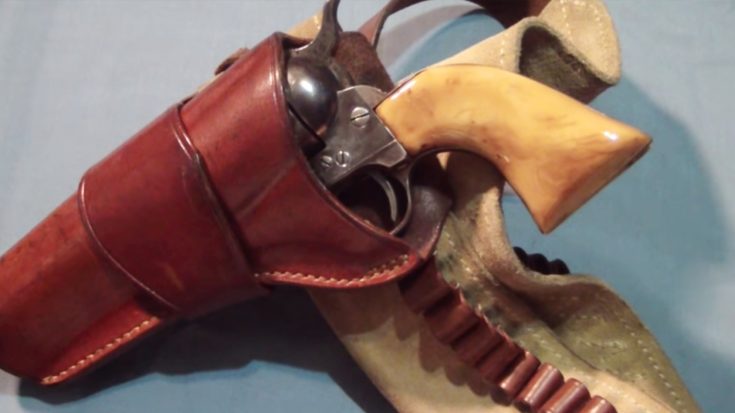 The Rock Island Auction Company has announced that they will be auctioning off John Wayne’s Colt Single Action Army revolver that he used in some of his most iconic movies.

The six-shooter pistol was used as a prop in legendary westerns like True Grit and The Cowboys. There was even a statue built of John Wayne at the John Wayne Airport in Orange County where he is holding a replica of the exact iconic pistol.

“John Wayne isn’t just a movie star. He’s a persona, a presence,” RIAC President Kevin Hogan said in a press release. “To so many, even today, he represents this image of America and masculinity. To have a revolver his iconic characters wielded on-screen, including during his Academy Award-winning performance in True Grit, is going to appeal to several genres of collectors as well as his fans.”

In addition to the gun being available for purchase on October 6, over 7,000 other collectible arms, military artifacts, and antiques will be there for people to bid on. The auction will go from the 6th through the 8th.

The auction company never specified how much the gun would most likely sell for, however, the 1892 saddle ring carbine Winchester John used as well in True Grit sold for $88,500 earlier this year. Expert collectors believe the revolver will sell in the upper tens of thousands of dollars as well.

An auctioneer at the company, Brian Lebel said that he has seen dozens of guns, along with other iconic western movie props sold through their venue. He said that people get even extra excited when John Wayne memorabilia is on the market at their auction.

“Interest in the Hollywood cowboys is generational,” Brian said, according to Outsider. “They come out of the woodwork for it, there’s a lot of people who don’t buy cowboy memorabilia but they love the Hollywood material. People who grew up going to Westerns and seeing John Wayne – he still has a great following.”

Check Out Video Of The Gun Below