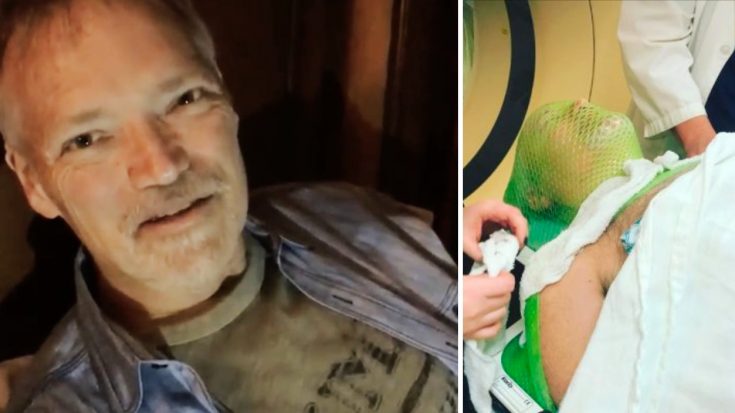 Earlier this year, 90s country star John Berry, who is responsible for the hits “Your Love Amazes Me,” “What’s In It For Me,” “You and Only You,” and “I Think About It All The Time,” revealed he was diagnosed with cancer.

A specialist found two tumors on Berry’s tonsils, and after sending them for a biopsy, they learned the tumors were cancerous.

Although a cancer diagnosis is usually incredibly scary, his wife Robin said, “You don’t see fear on these faces,” explaining that they have a great treatment plan and their complete faith in God.

Berry revealed that the type of cancer he has is one of the most treatable types, with a very high cure rate. Although they are maintaining a positive outlook, they asked that we all keep them in our thoughts and prayers.

The singer completed chemotherapy on March 28, and revealed that he had eight radiation sessions left.

John BerryAn Unexpected Story 4 Last day of chemo!! Feels really good to have that behind me. 8 more radiation…

Berry completed his final radiation treatment on April 9th and posted the moment he walked out of it – ringing a bell in celebration.

“Completed 35 treatments! I cannot believe I made it! Thank you! What a great day,” he said in the video.

Berry told PopCulture.com, “I’ll go back for periodic check-ups and have a pet scan done again,” Berry said. “That pet scan shows if any cancer has shown up. What they’re looking for is that two-year mark that says there’s no cancer. That’s kind of when they can say, ‘Have a good life.’”

He hasn’t really given any updates on his cancer battle since then, until recently. He shared a video on his social media pages saying, “I went to the doctor today and got a great report from Dr. Hunter and they’re really pleased with my progress.”

That is such great news!

Berry has continued to perform throughout all of this, making many appearances at the Grand Ole Opry.

Watch him give the update in the video below.