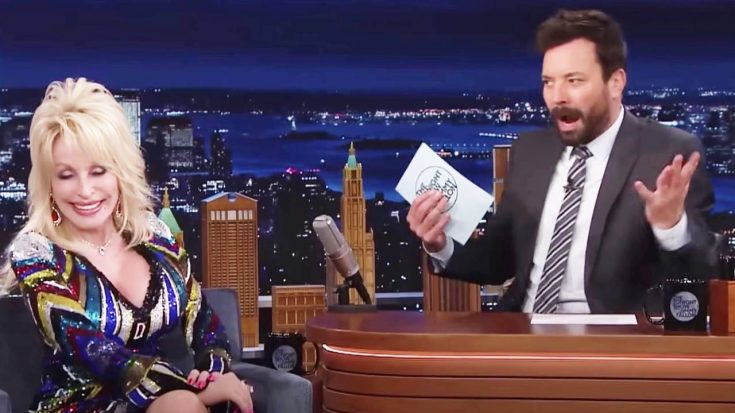 She is also getting ready to co-host NBC’s New Year’s Eve special with her goddaughter, Miley Cyrus (who also makes an appearance in Dolly’s movie).

To promote those two huge projects, Dolly went on several talk shows including The Kelly Clarkson Show, The TODAY Show, and The Tonight Show Starring Jimmy Fallon. She of course had to stop by Fallon’s show because he sings a duet with Dolly in her movie titled “Almost Too Early For Christmas.”

Dolly has been a guest on Fallon’s show many times, so they feel very comfortable in front of each other. So much so, that Dolly trusts him to clear up some rumors that have been floating around about her. Jimmy had a list of rumors on a piece of paper, and went through each one so Dolly could say if it was true or not, once and for all!

Jimmy said, “During the holidays, you have a Christmas tree in every room in your house, and you dress up as Santa to give out gifts to your family.”

Quickly, Dolly said that is the truth! She even provided photo proof!

Jimmy jumped into the next “rumor,” saying, “You once entered a Dolly Parton look-alike contest….and lost.”

That’s the truth! She said she over-exaggerated her make up and her wig, and she got out in the first round, no one had a clue it was really her!

“You sleep in your makeup in case you ever need to evacuate the house in the middle of the night.”

Immediately, Jimmy was convinced it wasn’t true, but Dolly said it is!

She said that especially if she is in Los Angeles, where there are earthquakes, she keeps her makeup on at night in case she has to evacuate the house and be on the news in the middle of the night.

“You bought your family’s first TV after winning a greased pole climbing contest.”

True! And Jimmy couldn’t believe it! She told the whole story, which you can watch in the interview below.

“You have a secret song locked away in Dollywood that will be released in 2045.”

And it’s the truth! She said she will probably be gone, but maybe not since she would be 99! She wrote a song and recorded it and no one has ever heard it, but it will in fact be released in 2045. She also said she kind of regrets it since the song is so good. We can’t wait to hear it!

Watch the full clip with Jimmy Fallon below.