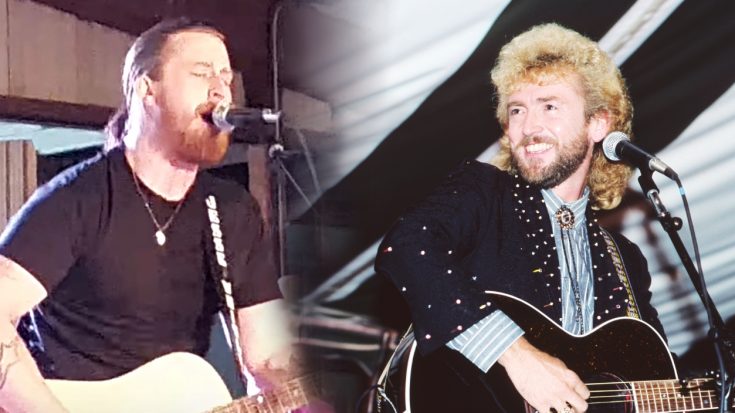 When legendary Keith Whitley left us in 1989, fans everywhere were broken-hearted knowing that there would never be another quite like him. Now, his son Jesse is carrying on his music by performing the songs we first fell in love with back in the 80s.

One such song is Keith’s 1988 hit, “Don’t Close Your Eyes.” The slow-burning ballad tells the story of a man in love with a woman who can’t seem to let go of her past. He offers her a world of love and happiness if only she could move on from the memories of her former lover.

The song reached #1 on the U.S. Billboard Hot Country Songs and #2 in Canada. A fan-favorite, the song was later covered by artists like Alan Jackson and Kellie Pickler. But hearing his own flesh and blood sing the tune was such an unreal experience for fans at the Poteet, TX Strawberry Festival that they knew they had to celebrate in a big way…

Standing on stage with a simple guitar and two friends to accompany him, Jesse poured his heart out – channeling the deepest emotions of pure love for his father as he took on one of his most famous songs. His twangy voice and stage presence draws you in and it almost feels like Keith was right there with him throughout the entire performance.

As he gently strummed his guitar his voice boomed across the crowd singing, “I know you loved him, a long time ago/ Even now in my arms, you still want him I know/ But darling this time, your memories die/ When you hold me tonight, don’t close your eyes”

As Jesse neared the chorus, he realized something very special was happening. Voices from the crowd can be heard singing his father’s words.

He had to pause for a moment and take it all in – appreciating their genuine love for his father’s work. A huge grin comes across his face and you can tell the crowd blew him away with the passion they showed him.

When he starts singing again, he comes back with even more power behind his voice – obviously having been energized by the audience. After singing the verses, he invites the crowd to sing along with him. They join in and this time he sings with them but can’t help but become overwhelmed with emotion again. He just smiled and said, “That’s bad a**.”

Jesse was moved by his audience that night in a way no one will ever be moved again. The legend’s son came together with his fans to celebrate the life and legacy that we lost years ago. It looks like Keith left it all in good hands.

You can watch the full video below to see the earth-shaking performance shared between Jesse and the crowd.