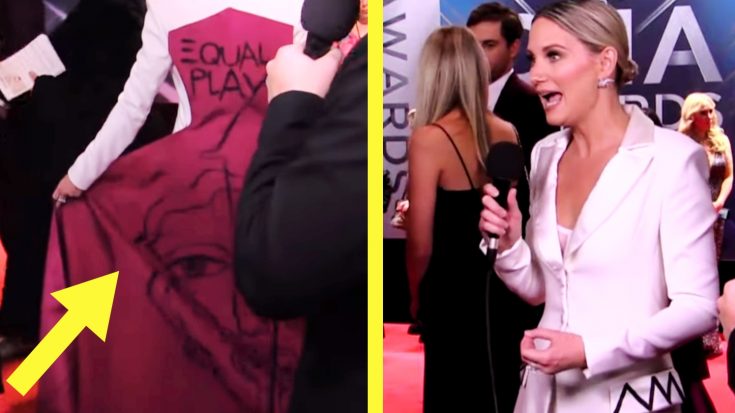 There’s no better time to make a statement than when you have a million cameras on you and the whole world is watching – particularly the world you’re trying to send a message to. And that’s exactly what Jennifer Nettles did tonight during the 2019 CMA Awards.

Striking out on the red carpet in Nashville, the lead singer of country duo Sugarland, and an independent artist herself, Jennifer Nettles wanted to bring attention to a topic that many have been talking about more frequently in the last couple of years: female airplay.

Previously, female singers like Maren Morris, Carrie Underwood, Kelly Clarkson, Kacey Musgraves, and even Reba McEntire have been quite vocal and open about the fact that females statistically get far less play on country radio stations than male artists. They have done the math and they are saying it doesn’t add up!

Putting the argument in front of the masses, Jennifer Nettles donned a white and burgundy pantsuit decorated with a matching cape at the back. All of it was inked up with black magic marker and phrases like “Play Our F****** Records,” “Equal Play,” and a giant female symbol.

The dress and cape turned heads to say the least, but it also had Twitter up in a blaze discussing the exact situation Nettles was calling attention to.

It’s easy to see that her efforts succeeded.

Check out some of the tweets below along with her interview with The Tennesseean.

In love with @JenniferNettles women empowerment outfit tonight for the #CMAawards ?? pic.twitter.com/5RjFxdhpw3

On the @Tennessean red carpet show, Jennifer Nettles explained her wardrobe choice: “When I found out that the CMAs were going to be celebrating women this year…I thought, what a fantastic opportunity to take the conversation beyond the applause tonight.” https://t.co/XBIaTTIX4x

I LOVE JENNIFER NETTLES AND I ALWAYS HAVE SHE MUST BE PROTECTED pic.twitter.com/Qj1bqUssaA