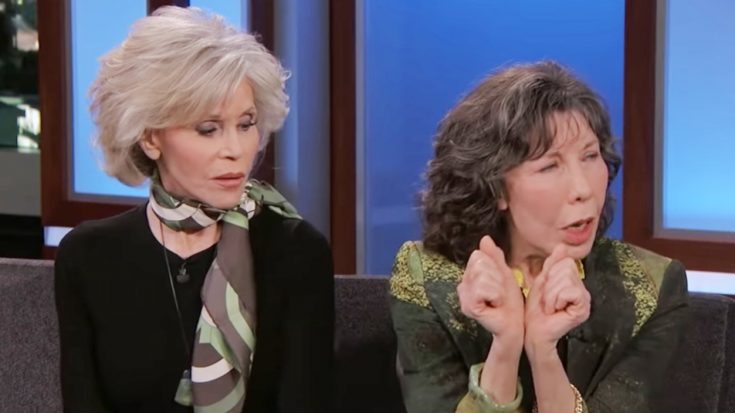 We fell in love with Dolly Parton, Jane Fonda, and Lily Tomlin when they joined forces to get back at their “sexist, egotistical, lying, hypocritical bigot” boss back in 1980.

36 years later, Fonda and Tomlin reunited to star in the Netflix original series Grace & Frankie, which about two women who find out their husbands of 40 years are leaving them for each other.

In the years since the show’s debut, Tomlin and Fonda have spent lots of time together off camera, including at recent climate control protests. Since October, Fonda has been arrested five times while protesting and many celebrity friends have been locked up right beside her including Ted Danson, Sally Field, and her three Grace & Frankie co-stars Tomlin, Martin Sheen, and Sam Waterston.

The two women co-hosted The Ellen Show last week and had Sheen and Waterston as guests, and they talked about when they got arrested.

Tomlin and Fonda stopped by Jimmy Kimmel Live to promote their upcoming season of Grace & Frankie and Tomlin said her one arrest “pails in comparison” to Fonda’s five.

“The arrests aren’t what are important. What’s important is that you’re willing to put your body on the line to say, ‘Wake up, everybody! This is a catastrophe!'” Fonda explained.

Fonda explained that if someone gets arrested three times for a civil act of disobedience, they get a court date. She said, “If you get arrested again, you’re kept overnight, which I was. But I’m white and famous so I was put in a cell by myself.”

She said that she’s previously been put in a cell “not by myself” and wasn’t treated so nice. They also spoke about the “warehouse” they were locked up in, Fonda’s famous 1970 mugshot, and how Tomlin should have been arrested in her youth for shoplifting.

Watch their full interview below.