It’s Official: Dolly Parton Is Being Inducted Into The Rock & Roll Hall Of Fame 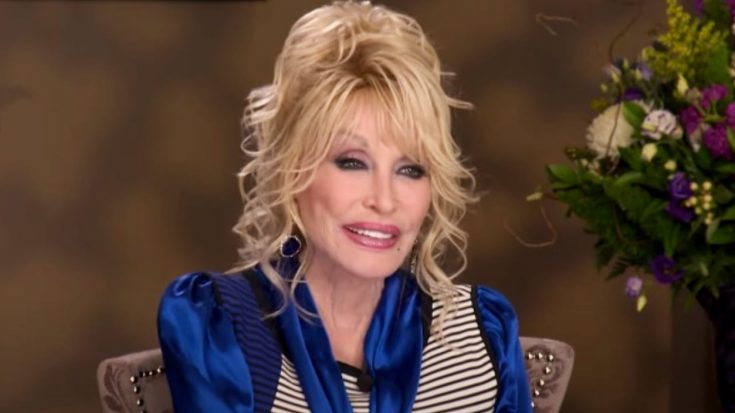 On February 2, the Rock & Roll Hall of Fame announced a list of nominees for its 2022 class of inductees. Country music legend Dolly Parton was one of the artists named on that list.

This was Parton’s first time being nominated for the honor. Her fans were thrilled to hear the news, and hoped she’d end up becoming one of the inductees.

However, on March 14, Parton released a statement expressing her desire to remove herself from consideration for induction:

“Even though I’m extremely flattered and grateful to be nominated for the Rock & Roll Hall of Fame, I don’t feel that I have earned that right. I really do not want votes to be split because of me, so I must respectfully bow out.”

Despite Parton’s desire to remove herself from the list of nominees, the Rock & Roll Hall of Fame said they couldn’t honor her request. They released a statement in response to her, saying:

“All of us in the music community have seen Dolly Parton’s thoughtful note expressing her feeling that she has not earned the right to be inducted into the Rock & Roll Hall of Fame. In addition to her incredible talent as an artist, her humility is another reason Dolly is a beloved icon by millions of fans around the world. From its inception, Rock & Roll has had deep roots in Rhythm & Blues and Country music. It is not defined by any one genre, rather a sound that moves youth culture. Dolly Parton’s music impacted a generation of young fans and influenced countless artists that followed. Her nomination to be considered for induction into to the Rock & Roll Hall of Fame followed the same process as all other artists who have been considered.”

The Rock & Roll Hall of Fame said Parton’s nomination had already been sent out to its 1,200 general ballot viewers, so they couldn’t take it back at that time.

A post shared by Rock & Roll Hall of Fame (@rockhall)

A few weeks passed, and Parton changed her mind about her nomination. In an April interview with NPR‘s Morning Edition, Parton said she’s “accept gracefully.”

She went on to explain why she initially rejected the nomination:

“But when I said that, it was always my belief that the Rock & Roll Hall of Fame was for the people in rock music, and I have found out lately that it’s not necessarily that. But if they can’t go there to be recognized, where do they go? So I just felt like I would be taking away from someone that maybe deserved it, certainly more than me, because I never considered myself a rock artist. But obviously, there’s more to it than that.“

Now, just a few days after that interview was published, the Rock & Roll Hall of Fame has announced its 2022 class of inductees…and Parton is among them!

The Rock and Roll Hall of Fame Reveals Class of 2022 https://t.co/XpJs5xcfyQ

Parton will join Eminem, Duran Duran, Lionel Richie, Pat Benatar, Eurythmics, and Carly Simon as an inductees in the Performers category into the Rock & Roll Hall of Fame this year.

Additional inductees were also announced in special categories. The Musical Excellence Award will be given to Jimmy Jam and Terry Lewis and Judas Priest. Harry Belafonte and Elizabeth Cotten are the recipients of the Early Influence Award. Also, attorney Allen Grubman, record executive/producer Jimmy Iovine, and R&B singer/Sugar Hill Records founder Sylvia Robinson will all receive the Ahmet Ertegun Award.

Rolling Stone reports the inductees will be recognized during a ceremony on November 5 at the Microsoft Theater in Los Angeles.

John Sykes, the Chairman of the Rock & Roll Hall of Fame, released a statement about the new class of inductees:

“This diverse group of inductees each had a profound impact on the sound of youth culture and helped change the course of rock & roll. Their music moved generations and influenced so many artists that followed.”

Please join us in congratulating Parton and the other inductees into the Rock and Roll Hall of Fame!