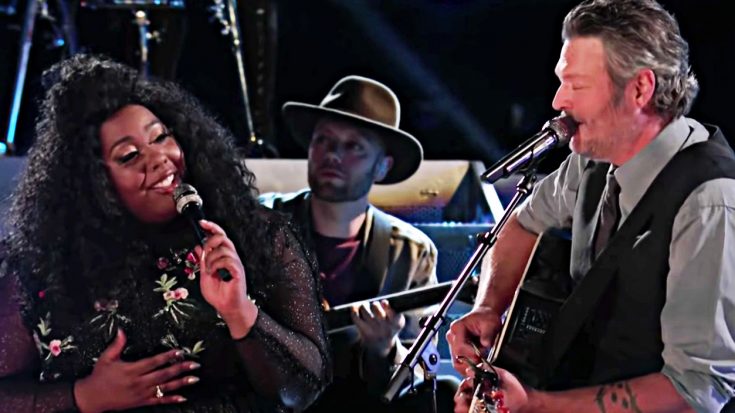 The former backup singer for Wynonna Judd and Carrie Underwood (among others) teamed up with her coach for this soft and tender duet of Wynonna’s beloved classic.

Taking the stage during The Voice‘s two-part season finale, Blake Shelton and one of his two finalists sat down for this beautiful and dazzling tribute to one of country music’s best-known female vocalists.

Singing a special song of @Wynonna's tonight with my amazing coach @blakeshelton ! We both love this song ALMOST as much as we love Wy!!

Will you be watching @NBCTheVoice tonight?

During this season, Shelton was fortunate enough to have two of his contestants make it to the very end and each of his performances with them were unforgettable – but it was his duet with Kyla Jade for Wynonna’s “Only Love” that left the audience filled with emotions.

"Kyla, if you don't win The Voice, I don't know why we call this show #TheVoice ‼️" – Blake to Topeka native Kyla Jade just now on the finale! ❤️

Omg…Kyla and Blake are sooooo good together???She can do anything!!! Just WOW???

Kyla, who grew up singing in church, later worked with Carrie Underwood and then went on tour with Wynonna Judd as one of her first professional jobs as a backup singer. Later on, she worked with Jennifer Hudson as a backup singer and has been cheered on by both Judd and Hudson during this whole season of The Voice!

Throughout her other performances, Kyla has demonstrated her raw vocal power and the incredible strength of her lower register, but in this two-part rendition of “Only Love,” she takes it up a notch.

With tender, soft notes, Kyla blends and harmonizes with Shelton in an unbelievably good way. While the song might not fit directly in her wheelhouse – she definitely proves she can sing anything!

Kyla Jade sounds good with whatever style of music she does…that's true talent right there…you go girl!!!!my votes for you!!!!

It’s clear that Kyla Jade has the voice of an angel and some dazzling, pure talent – but does she have what it takes to win this competition?

Watch Blake Shelton and Kyla Jade perform this sweet tribute to Wynonna below and let us know who you’ll be voting for in the comments.