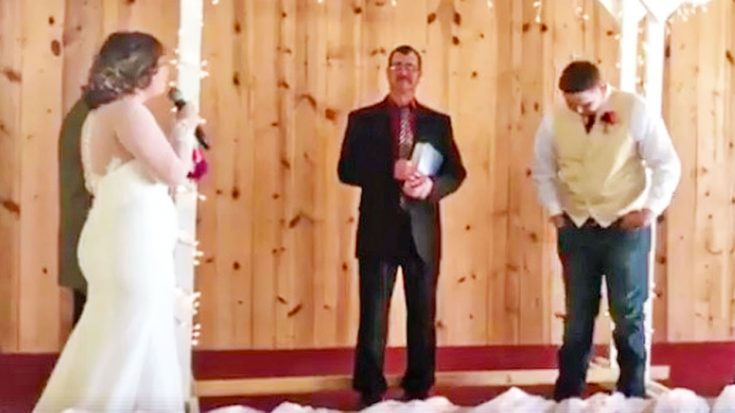 A Romance For The Ages

When Allison Dyer met Jason Thurgood at church, she wasn’t looking for a relationship at that time. But despite the way she felt, she knew there was something special about him.

“I didn’t want a relationship [when we met], but I knew God was telling me he was the one, so I took a leap of faith,” Allison told Yahoo!

The two were only young teens when they met, and dated for four years before they tied the knot on October 14, 2017.

Over those years, the two have enjoyed traveling together to sing at various churches. So when it came time for their wedding, it only made sense that music played a huge role in shaping one of the most memorable moments of the day.

One song that has always meant a great deal to Allison and Jason is Elvis Presley‘s beloved hit, “Can’t Help Falling in Love.” The romantic tune was a number one hit for “The King,” and was further popularized by British reggae band UB40, who also took it to number one.

Jason explained to Yahoo! just how much the song means to him and Allison, saying, “Allison comes from a place where she used to be in an abusive relationship, and to know that someone like me could change that for her is absolutely extraordinary.“

As it came time to plan out all of the details of their wedding, Allison decided to make her walk down the aisle extra special. Instead of simply walking along to a song being played, Allison decided that she would sing “Can’t Help Falling in Love” as she walked to meet Jason at the altar.

Allison struggled to keep her plan a surprise, but managed to pull it off. Still, she couldn’t help but hint at what was to come, and said she told Jason, “If he didn’t cry, I was going to turn around and do it all over again.”

Well that’s exactly what Jason did when Allison came walking down the aisle while singing “Can’t Help Falling in Love.” As soon as he heard the sweet voice of his bride singing their special love song, Jason doubled over and burst into tears.

He remained visibly emotional the entire time that Allison made her way to him. She took her time, and finished singing the whole song once she arrived directly in front of her groom.

Jason explained his reaction to Yahoo!, saying that the performance took him completely by surprise. “I saw the mic in her hand, and she was singing, and at that moment, the floodgates opened up,” he said.

The touching moment was captured on video, and that video has since gone viral. As of press time, it has millions of views.

Congratulations to Allison and Jason!