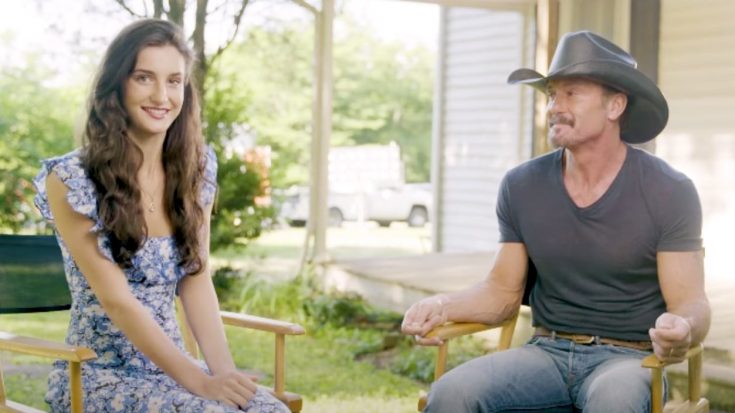 When Tim McGraw and Faith Hill‘s daughters were growing up, they went to great lengths to protect them from the spotlight. As the girls grew older, the country power couple started to share more photos of them online, and even took them out to public events.

Now, Gracie, Maggie, and Audrey are all adults and have moved away from home. All three girls have shown an interest in the arts, whether it be singing or acting.

Tim and Faith’s youngest daughter, Audrey (age 19) has already made a name for herself as a model. She often shares some of her stunning glamor shots on her own Instagram page.

Audrey’s modeling photos caught the attention of the crew that was planning Tim’s music video for his new song, “7500 OBO.” While the song is sung from the perspective of a man talking about a beloved old truck of his, the music video crew wanted a young girl to be the star of the video. They immediately thought of Audrey.

Tim loved the idea of casting Audrey as the lead in his new music video. He ran it by Faith first, and she agreed to it.

“…we realized how much it made sense to us and our family and our beliefs, and how we want our daughters to be represented,” Tim said in a short Instagram clip about how Audrey got cast in the music video.

Audrey’s appearance in the “7500 OBO” music video was her acting debut…and she crushed it! Fans have been loving the video, which has generated well over 700,000 views just five days after it premiered.

A few days after the video’s debut, Tim shared a clip on his YouTube channel that offers a behind-the-scenes look into how it was made. One of the funniest parts in the clip comes when Tim starts cringing as he watches Audrey film one of her kissing scenes.

The behind-the-scenes clip also features an interview with Tim and Audrey. During the interview, they spoke about how Audrey came to be cast in the video.

“I was really interested in it, to be a part of one of dad’s music videos sounded like it would be really fun,” Audrey said.

Audrey also explained why she felt drawn to this particular song of her dad’s.

Look below to watch Audrey star in the music video for “7500 OBO.” She did an awesome job!

You can tell that Tim is so proud of his baby girl.