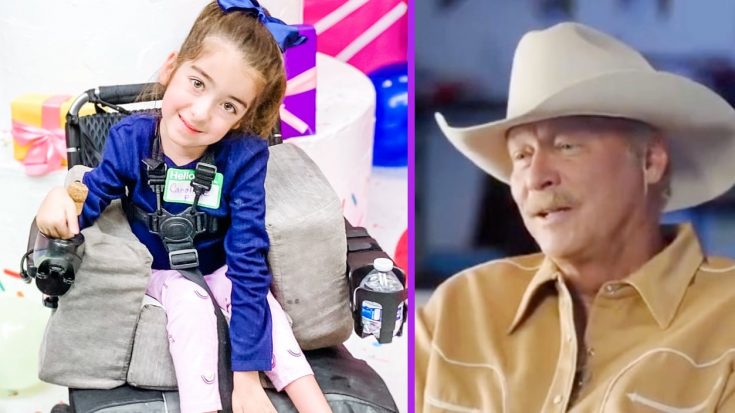 Alan Jackson recently revealed he was diagnosed with a degenerative nerve condition called Charcot-Marie-Tooth disease, also known as CMT. The condition is hereditary, and it runs on Jackson’s father’s side of the family:

“We realize now that my grandmother had it on his side,” Jackson said in an interview on TODAY. “And my oldest sister that’s ten years older than me has it, and she doesn’t get around too good now.” His late father also had the condition.

Jackson was diagnosed with CMT ten years ago, but kept his diagnosis under wraps until now. The condition is starting to affect him more, and he decided it was time to let his fans know what’s going on:

“And it’s getting more and more obvious,” Jackson said on TODAY. “And I know I’m stumbling around on stage. And now I’m having a little trouble balancing, even in front of the microphone, and so I just feel very uncomfortable. And I just want people to know that’s why I look like I do, if they’re wondering…”

There is no cure for CMT, but it thankfully isn’t fatal. Jackson will live with the condition for the rest of his life.

After hearing Jackson share his story, one nine-year-old girl with the same condition has expressed she’d like to meet him.

Fox 26 out of Houston, Texas spoke with the girl’s grandfather, Dr. Stephen Fletcher, who is a pediatric neurosurgeon. He said while he’s sorry to hear of Jackson’s diagnosis, he’s glad he spoke about it publicly to help raise awareness about CMT.

Now that Jackson has gone public with his diagnosis, Dr. Fletcher would love to connect with him to host a benefit concert for CMT. “I think those type of things will be tremendous for raising awareness,” Dr. Fletcher said.

You can watch Dr. Fletcher’s full interview about his granddaughter by clicking here. Then, tune in to the video below to watch Jackson speak about his own CMT diagnosis.