George Jones Teases Tammy Wynette During ‘The Ceremony’ Duet In 1972 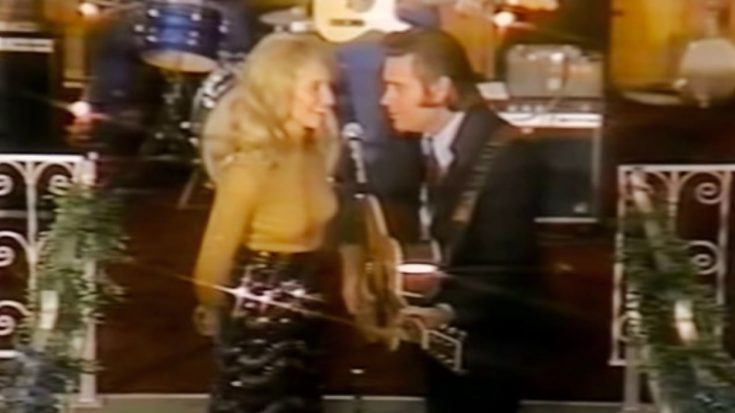 One Of Country’s Greatest Power Couples

George Jones and Tammy Wynette had an undeniable connection, which is why their duets are considered some of the greatest in country music history.

One particular performance of “The Ceremony” in 1972 at the Old Plantation Music Park in Lakeland, Florida shows just how much fun Jones and Wynette would have while singing together.

Jones and Wynette were married in 1969, but ended up divorcing in 1975. Despite their divorce, the two singers remained close, and they often collaborated in the studio and on the stage in the years that followed.

But back in 1972, Jones and Wynette were still a couple, and had just released an album together called Me and the First Lady.

The album contained the song “The Ceremony,” which plays out like a wedding service, with verses where Jones and Wynette would renew their vows to one another.

Due to the couple’s popularity, the song was a hit with fans, and became one of the main highlights of their shows.

The song, and Jones and Wynette’s 1972 Lakeland performance, are also favorites of their daughter, Georgette.

Georgette, who has also experienced success as a country music artist, shared the link to the video on her Facebook page, captioning it as follows:

“Daddy was always joking with Mom and trying to catch her off guard. …lol….wait for the end….it’s the best! Love watching them together.”

Daddy was always joking with Mom and trying to catch her off guard. …lol….wait for the end….it’s the best! Love watching them together 🙂

Here’s How It Goes

As the “preacher” in the song talks about joining Jones and Wynette in marriage, the two look at one another and smile. When she goes to sing her part of the duet, Wynette finds it hard to keep a straight face, and keeps laughing despite her best efforts.

Jones, on the other hand, doesn’t try to be serious, shrugging his shoulders and making a funny face when he sings about Wynette and him being together forever.

After the “preacher” proclaims that Jones and Wynette are now man and wife, Jones reaches over and grabs Wynette, passionately kissing her several times. Wynette is clearly surprised, and the two of them share a good laugh with the crowd.

Georgette was right, it is always fun to watch Jones and Wynette together, and this performance is no exception.