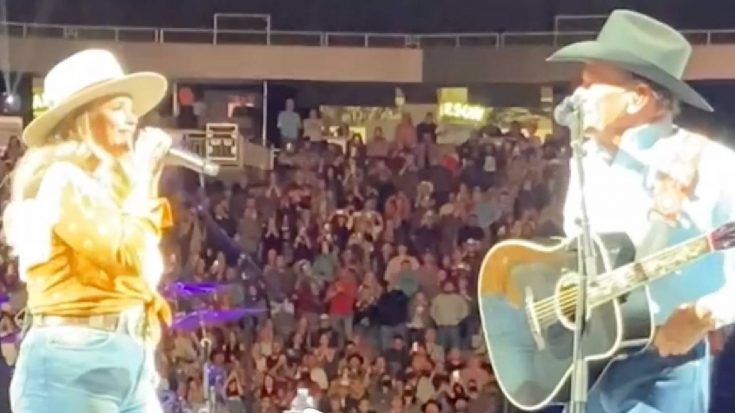 If you know anything about Miranda Lambert, you know she loves God, country music, animals, and George Strait.

Back in August, Strait announced he’d be heading back to Vegas for select dates, the first being December 3rd & 4th with opener Caitlyn Smith and the next time being February 11th and 12th with Tenille Townes.

Lambert was a surprise guest at George Strait’s Las Vegas show on December 3rd and when she walked on stage, the crowd went wild! Wearing a white cowboy hat and an orange fringe outfit, Lambert said, “That’s the King right there!”

When she got near him, Strait asked her, “Miranda, how you doing?”

“Texans are very, very proud, and we like to sing all about Texas,” Lambert added, before diving into Strait’s song from his 2001 album The Road Less Traveled.

Like Strait said, this wasn’t the first time these two have performed this song together. In 2019, the pair performed the song for a packed house at the 54th Annual ACM Awards.

Their recent Vegas performance was just as good, if not better than their ACM performance. Maybe because it was unexpected!  Make sure to press play on the video below to watch their surprise duet! There were so many people taking video, so click here for a different angle.