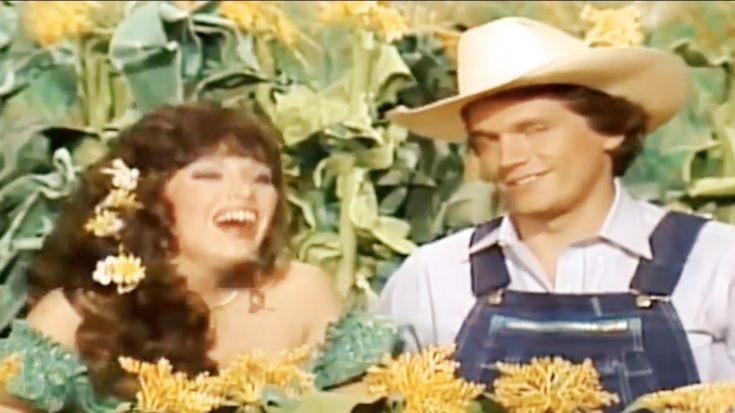 As “The King of Country,” George Strait has made his name in the music industry. What most don’t know is that he has also tried his hand at comedy! We dug up this ridiculous vintage act Strait took part in for an unforgettable episode of  Hee Haw.

Through its time on TV screens, Hee Haw was the longest-running comedy variety show that was inspired by country music and life. The first episode aired in 1969 and the beloved variety show closed up shop in 1992. Luckily, a few of the sketches are beginning to resurface – and they are just too much fun to watch.

One such video featured George Strait along with other country music stars such as the Statler Brothers and Roy Acuff. George Strait enters the scene first. Decked out in overalls and a cowboy hat, he is still swoon-worthy as he grins and explains what exactly he learned in college.

He jokingly says, “About the only thing I learned was how to appreciate the two-party system… yeah, one party Friday night and one party Saturday night.” He can’t help but laugh at his own silly joke before ducking underneath the corn stalks surrounding him.

Next up – The Statler Brothers! Harold Reid opened the floor for a slew of “my mother-in-law is so ugly…” jokes. Don Reid tries to one-up his brother saying, “Mine looks like she fell off an ugly tree and hit every limb coming all the way down.”

The other band members, Phil and Jimmy join in the joke – with Jimmy ultimately winning the “friendly” contest.

As the video continues, even Roy Acuff stops by to make an appearance!

Finally, as the sketch comes to an end – George Strait returns to the scene for one more witty comment. Check out the full video below and get ready to laugh as these classic country artists roll out the jokes!