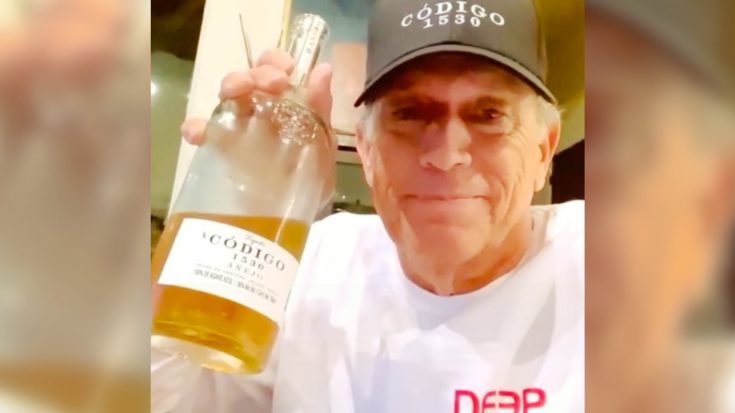 People have been finding different ways to help keep themselves entertained during this time of quarantine and social distancing. Some have turned to crafts and home renovation projects, while others put together puzzles, read, or go on long walks outside.

Many country artists have been using this time to share music with their fans through virtual concerts. Keith Urban, Brad Paisley, and Garth Brooks are just a few of the many country singers who have kept themselves and their fans entertained through performances livestreamed to their social media profiles.

Then you have Dolly Parton, who released a new video on Thursday nights to share a bedtime story for children (or adults!) to enjoy.

One artist who has remained pretty quiet in quarantine early on was George Strait. Though “The King of Country” did break his silence to mourn the death of Joe Diffie. Diffie passed away on March 29 due to complications associated with coronavirus (COVID-19).

“We’ve lost one of our own now to this silent enemy,” Strait wrote in a statement on Facebook. “That really hit home to me.”

George ended his message with a call for fans to stay home and pray for those on the front lines fighting against the virus. “Please stay home, healthy, and well. Pray for your family, friends, first responders, health care providers, our President and the world,” he wrote.

We’ve lost one of our own now to this silent enemy. That really hit home to me. I worked with Joe in the past. Great guy…

To help himself get through quarantine, Strait has been turning to his #1 drink of choice…Codigo Tequila. Strait is invested in the company that creates Codigo, and it’s obvious he loves the brand.

In a video posted to the Codigo Instagram, Strait addresses his fans and gives Codigo credit for helping him through these tough times.

“When I’m under quarantine, which I am quite a bit, these times are a little more serious than most but I can always count on Codigo 1530 to get me through it,” he said.

Strait then went on to name his favorite type of Codigo and explained how he prepares his drink. He puts a large, round chunk of ice in his glass, then pours the tequila straight from the bottle.

Watch the video below to see Strait fix himself a drink and talk about his love for Codigo.

☩ If it’s not your favorite, you haven’t tried it! ☩ @georgestrait ?

Strait enjoys drinking Codigo so much, he released a song about it!

The appropriately titled “Codigo” was released in March 2019 and was included as a track on Strait’s album Honky Tonk Time Machine. Strait also filmed a music video for the song, which shows him walking through agave fields and sharing a dance with his wife, Norma. We’ve included that music video for y’all to enjoy below.

Have you ever tried Codigo before? Based on how much Strait brags about the drink, it has to be good!