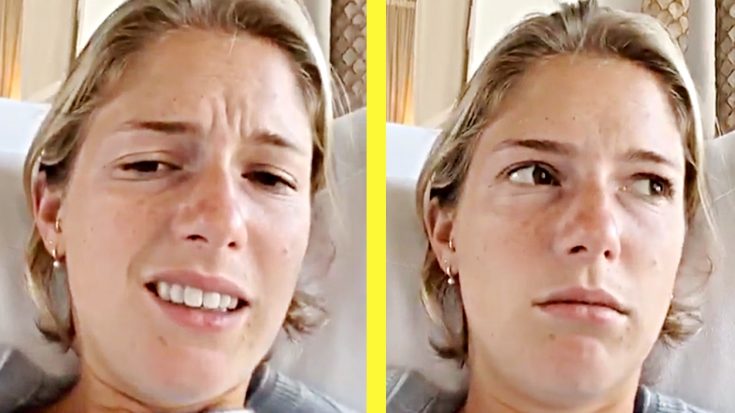 Tim McGraw took to social media to share a video of his daughter, Maggie, recording a video of herself.

During the recording, you can hear Tim and Faith having a conversation in the background. Faith is nonchalantly talking about her age, when Tim chimes in and says, “Cause you got that booty goin’ on!”

The video camera is recording Maggie’s face as her parents’ conversation is going on, and her reaction to her dad’s commentary is priceless.

At first, she seems amused by her parents’ conversation, that is until her dad compliments her mom’s booty. I think it’s safe to say, Maggie was not expecting those words to come out of his mouth.

Faith Hill and Tim McGraw first met at the Country Radio Seminar in 1994. They were both a part of the “New Faces” event. While backstage all the artists took a group photo and there was an instant attraction between Tim and Faith.

Where it all started… Follow @Officialcmhof for more on our exhibit coming in November! #CMHOF50

In an interview with The Bobby Bones Show, Faith and Tim spoke about the first time he officially asked her out. Faith explained that Tim came over to her home, unannounced, with a bowl of homemade chicken and dumplings and cornbread that he had made from scratch. Faith continued the story explaining that on top of the aluminum foil-covered bowl, there was both a spoon and a fork. Tim told her, “I didn’t know if you liked to eat your dumplings with a spoon or a fork.”

Tim jokingly replied to her telling the story, “You make up for your inadequacies.”

Happy birthday to this crazy, talented, beautiful woman. I am so lucky to be married to and be with her for the rest of my life. The best mother and role model that my 3 daughters could possibly have. She is extraordinary!!

Tim and Faith were married in October of 1996 and went on to be one of country music’s power couples.

@FaithHill – “Happy anniversary baby Got you on my mind”

No doubt the fire is still burnin’ for these two lovebirds!

Watch Maggie’s reaction to her father complimenting her mom’s “booty” as well as Tim and Faith’s interview with The Bobby Bones Show below.

Embarrassing your daughters ? Sound On ? @faithhill