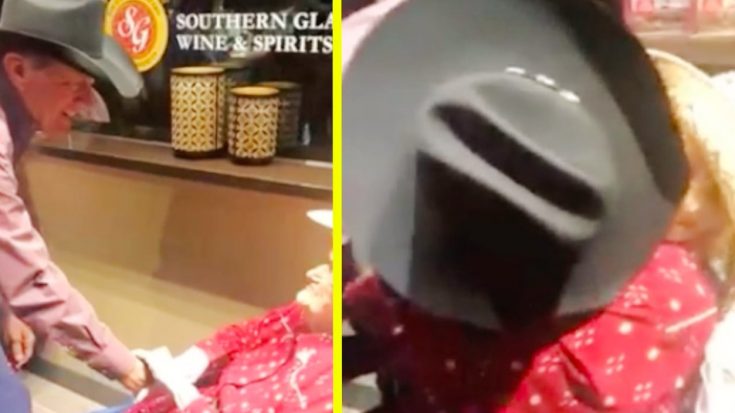 One woman got the chance to live out every country girl’s dream during a meet and greet with George Strait.

The woman was able to meet “The King of Country” following one of his shows in Las Vegas in early 2020. It seemed like the perfect way for her to spend her day, since it was her 96th birthday!

Strait walked into the room to greet the woman, smiling as he asked, “Are you the birthday girl?“

He then reached out his hand to grab hers. She was silent for a moment, in awe of the fact that one of country music’s biggest stars was standing right in front of her.

But her shyness soon disappeared, and she shared her birthday wish with Strait in hopes he’d be able to grant it.

Strait was happy to oblige, and gave the birthday girl a kiss on the cheek. Like Strait, she was wearing a hat, and their hats hit when Strait leaned in to kiss her. Strait’s hat actually fell off of his head, but he managed to catch it before it hit the floor.

The whole thing was funny to Strait, who commented “We bumped hats” while he laughed.

He then took the time to sign some autographs, giving the woman a permanent souvenir from her special day.

Thankfully, someone filmed Strait’s entire interaction with the woman, and posted the video on Facebook. As of press time, the clip has well over one million views.

You can witness the precious interaction between “King George” and the 96-year-old birthday girl below. He is such a gentleman!