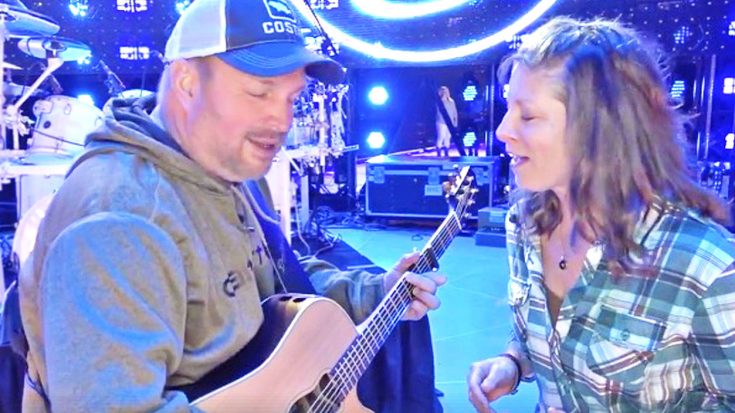 In November 1995, Col. Bill MacArthur travelled all the way to the Russian Mir space station with a collection of one country artist’s greatest hits in tow. That artist was Garth Brooks, and his connection to space and astronauts has been strong ever since.

“I got goosebumps everywhere,” exclaimed Jack after Garth and Trisha finished singing.

Garth finally got the chance to meet Peggy and Jack in person when the two of them stopped by to visit during his Inside Studio G Facebook Live session on Monday (February 26). It just so happens that Garth was gearing up to perform at the Houston Rodeo, and Houston is the home of NASA.

Earlier in the session, Garth introduced his fans to another astronaut named Tracy. Garth shared that before she launches into space, Tracy stops to sing one of his songs…and it’s none other than “The River.”

Before Garth brought Tracy on-camera, he played a short clip of her singing “The River” before one of her launches. You can tell just from that short clip that she has true talent, especially since she sang a cappella.

After the clip played, Garth introduced everyone to Tracy and asked her to sing “The River” with him. He started playing on the guitar, and let the talented astronaut take over while he sang soft harmonies.

Talk about a full orbit moment! Thank you Tracy for singing “The River” with me!!!! love, g *For The full #StudioG LIVE from #RodeoHouston, go to Facebook.com/GarthBrooks or click link in bio ** @nasa @rodeohouston

Talk about a magical moment! While their duet may have been short, we’re sure it’s something that neither Garth or Tracy will ever forget.

Once Garth finished singing with Tracy, astronauts Peggy and Jack joined the duo to talk about their experiences in space. They even brought along a pair of space gloves for Garth to try!

You can watch Garth’s full Studio G session with Tracy, Peggy, and Jack in the video below. It’s clear that Garth has great respect for them, which makes us respect him even more!