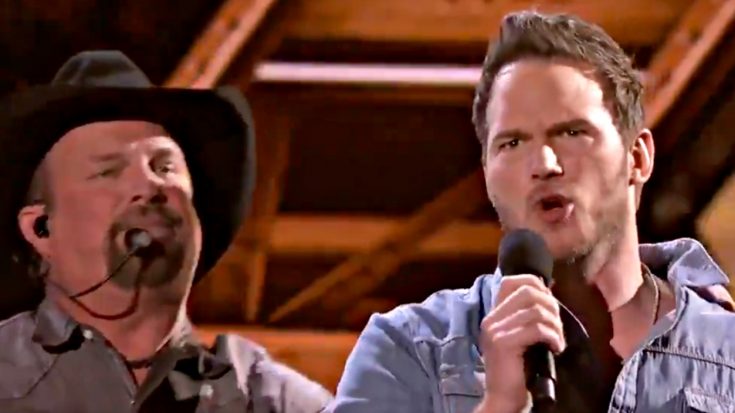 Garth Brooks had one heck of a night!

The country singer was awarded with Artist of the Decade at the 2019 iHeartRadio Awards, held on Thursday (March 14) in Los Angeles.

It's a big night for Garth Brooks at our #iHeartAwards2019! He is being honored with the Artists of the Decade Award and will take the stage for a massive performance! Watch at 7pm on @Foxtv. pic.twitter.com/2gRjGAxP75

He also took the stage to perform some of his biggest hits including “Callin’ Baton Rouge,”  “Thunder Rolls,” “Ask Me How I Know,” and “Friends in Low Places.” Before he did, though, superstar actor and passionate country music fan Chris Pratt introduced the legend to give him the award.

He told the audience that he’s looked up to the singer his entire life, and his music “headlined the soundtrack to my life.”

He continued, “I bought every one of his albums and I had the lyrics memorized by the very next day. When I met [him], I wanted to return the favor. I wanted to give him a fraction of the joy he’s given me for so many years. I told him, ‘Garth, you ever need a leading man to play you in a movie I can make that happen.'”

Here’s where Brooks’ hilarious sense of humor came in.

Pratt said, “True story, he looked me square in the eyes and he said ‘Really? You know Bradley Cooper?'”

A montage paying tribute to his career played, which showed interview footage, concert footage, and some behind the scenes stuff we’ve never seen before!

If this doesn’t get you pumped up about @garthbrooks or life… nothing will. #iHeartAwards2019 pic.twitter.com/Z3XGGaVrmx

After the montage, he kicked off his epic medley, and during “Friends In Low Places,” he went side stage to grab Pratt and bring him out front and center. The Guardians of the Galaxy star looked as shocked as we did!

Watch Brooks bring out Pratt below.

'Cause I've got friends in low places ?@garthbrooks #iHeartAwards2019 pic.twitter.com/enDYE9dgF3

The moment meant so much to Pratt that he wrote the following on Instagram:

“Welp. I guess I died and gone to heaven. Thank you Garth Brooks and congratulations on the artist of the decade award. It was an honor to sing with you and the band on stage. I can’t wait for the upcoming stadium tour. God is so good. Thank you thank you thank you ??♥️??”

Welp. I guess I died and gone to heaven. Thank you @garthbrooks and congratulations on the artist of the decade award. It was an honor to sing with you and the band on stage. I can’t wait for the upcoming stadium tour. God is so good. Thank you thank you thank you ??♥️??

Pratt also shared backstage footage of Brooks and his band singing the beginning to “Much Too Young (To Feel This Damn Old),” and the actor was getting visibly emotional!

Here I am all misty eyed backstage. A moment I will never forget. Sound on.