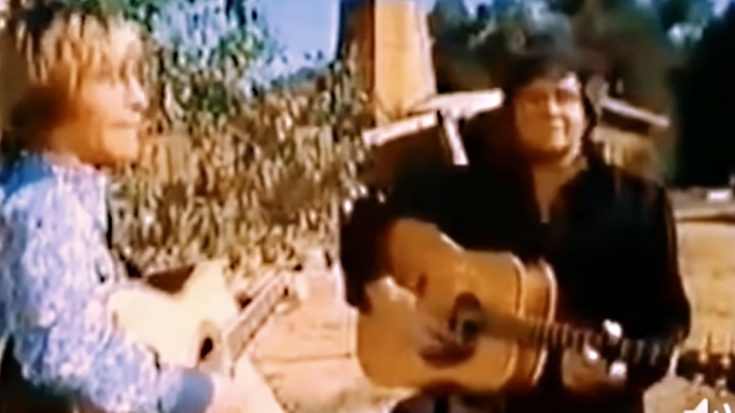 The country music world has treated us to an array of unforgettable duets. From Dolly and Kenny’s “Islands In The Stream” to Loretta and Conway’s “Louisiana Woman, Mississippi Man,” some of country’s greatest talents served up incredible harmonies. There might be one performance you’d never heard about before between two country music icons and their guitars.

The famous tune “Take Me Home, Country Roads” has made its mark on the world. Originally written for the legendary Johnny Cash, Denver heard it first and knew he wanted to get his hands on it. The song was then released by singer John Denver in the early 70s and has been a hit since its birth. Although a series of artists have covered the song, none can compare to the passion behind Denver’s vocals. Luckily for us, Denver had one country king in mind who he thought might sound just right for a duet.

Denver invited Cash to do a duet to his “Take Me Home, Country Roads” classic. Sitting together with their guitars on a grassy farm, the two began to play the tune with smiles plastered on their faces the whole time. With Denver in a paisley blue button-down and Cash in all black, the two looked dapper as ever together.

For a good portion of the song, Cash took the spotlight as he sang the famous lines.

“I hear her voice, in the morning hour she calls me. The radio reminds me of my home far away and driving down the road I get a feeling, that I should have been home yesterday, yesterday.”

Although this isn’t Cash’s original song, he sang it like it could’ve been. Cash’s deep vocals paired perfectly with Denver’s higher-pitch when the time came to sing the chorus. From their phenomenal talent and twangy vocals to their flawless harmonies, it’s no doubt this is one crossover that will never be forgotten.

Watch the full duet below.