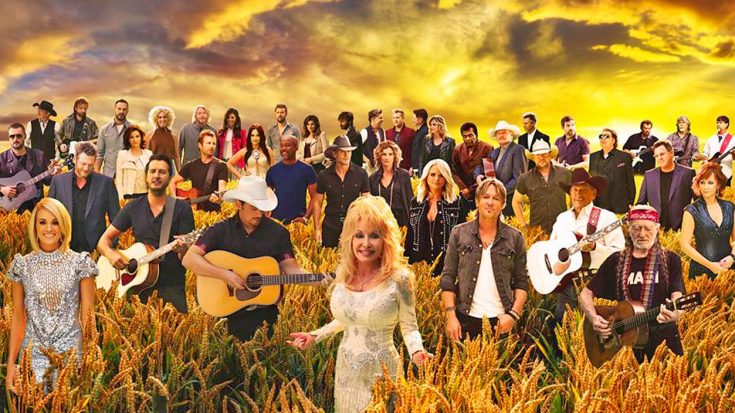 To celebrate the 50th Annual CMA Awards in 2016, the Country Music Association wanted to celebrate this monumental occasion in a way that has never been done before. They recruited 30 past CMA Award winners to perform an epic mashup of three of country music’s most beloved songs:

Willie Nelson’s “On The Road Again”

And Dolly Parton’s “I Will Always Love You”

Classic and modern country artists joined forces to deliver a chilling medley that has been viewed a whopping 29 million times on YouTube alone.

The song, which is titled “Forever Country,” features legends such as Vince Gill, Alabama, Charley Pride, Ronnie Milsap, George Strait, Alan Jackson, Reba McEntire, Willie Nelson, and Dolly Parton who all sang snippets, as well as some of modern country’s biggest stars like Luke Bryan, Miranda Lambert, Carrie Underwood, Tim McGraw, Faith Hill, and Brad Paisley. Randy Travis even made an appearance, although he did not sing.

Directed by Grammy Award-winning director Joseph Kahn, the music video is a visual masterpiece, perfectly embodying what country music is all about. The song celebrates every form of country music from classic to traditional to modern and can be enjoyed by country fans of all ages.

Can you spot all the country stars? Let us know in the comments, and make sure to watch the incredible music video below.