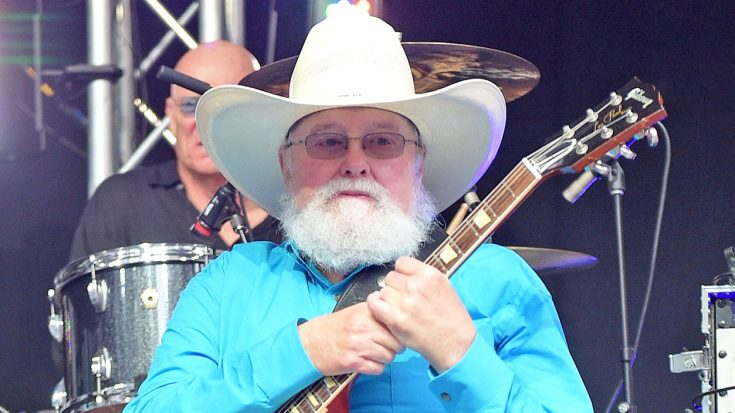 Because so many country music lovers travel to Nashville for CMA Fest, a lot of the artists use this as an opportunity to host fan club parties for their dedicated followings.

Although Thursday (June 7) was the official first day of CMA Fest, most fans arrived earlier in the week for other festivities, including Charlie Daniels‘ Fan Club party. The party was held in Mount Juliet, a city located about 17 miles east of downtown Nashville, on Wednesday (June 6).

Unfortunately, the event did not go as planned, as the building it was held in was put on lockdown – so no one was allowed to go in or out. According to WSMV-TV, police were on the hunt for a man who had allegedly shot his wife Jessica and was on the run in the same area as the party.

Before the party began, Daniels tweeted his excitement.

CDB Volunteers fan club annual get together in Mount Juliet today, wish you all could join the fun.
Got to head that way, Little Charlie will probably be tweeting some stuff from there
Check with yall after a while

But hours later, he went back on Twitter to address what happened.

“We had a situation at the fan club get together today,” he wrote. “The Mt. juliet [sic] police were looking for someone who shot his wife and was on the loose and had to lockdown our building.”

He then apologized to anyone who wasn’t able to get in for this reason, and let his fans know that the manhunt was over, as the police had caught the shooter.

We had a situation at the fan club get together today The Mt. juliet police were looking for someone who shot his wife and was on the loose and had to lock our building down. We apologize to any of our fans who got out and couldn’t get back in. The police caught the shooter

WSMV actually reported that the man died from a self-inflicted gunshot wound after hours of negotiations with the police. Jessica also passed away from her injuries, and was confirmed in a tweet from the Wilson Country Sheriff.

***UPDATE***
The search for Mr. Adams is now over. After hours of negotiations with Mr. Adams, he suffered a self-inflicted gun shot and was discovered deceased. Thanks for everyone’s patience as we had to notify the family first out of respect before anything could be released.

We’re glad everyone at Daniels’ fan club event is safe from harm, and our thoughts and prayers go out to Jessica’s family during this difficult time.