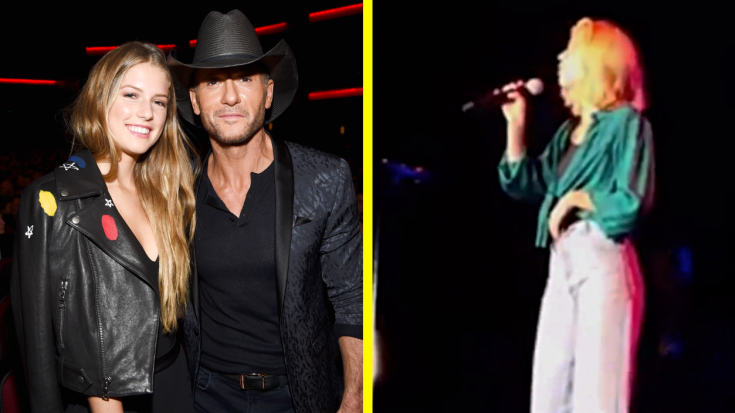 During an unexpected moment at their duet concert this week, these two stars were two really proud parents after watching their daughter take the stage and perform a song – all on her own!

Tim McGraw and Faith Hill have three beautiful daughters together and having grown up with musical superstars for parents – it’s clear that the music gene is in their blood!

The eldest, Gracie, has been singing with her own band in Nashville for many years – but the middle child, Maggie, just went off to college not that long ago so folks haven’t seen much of her! Oh – and their youngest, Audrey, already has stolen the show during VIP events at their concerts before! They clearly have three very talented daughters.

Both McGraw and Hill have welcomed their daughters to the stage before, this is one of the very first times the world has heard Maggie sing – and she stole the show during this magnificent solo on that massive stage!

During their Soul2Soul World Tour 2018, McGraw and Hill stopped over in London, Ontario, Canada for a show and brought along 20-year-old Maggie for a super special surprise the audience couldn’t get enough of!

“We’ve got something pretty incredible for you,” McGraw said into the microphone. “Ladies and gentlemen, our daughter Maggie McGraw!”

With that, he carried a microphone stand over to Maggie as she walked out, gave her a hug and kiss on the cheek, and walked backstage to watch this precious moment unfold.

Young Maggie poured her heart and soul out into this bluesy, soulful performance of “I Put a Spell On You” and truly earned the standing ovation and seemingly endless applause the crowd gave her!

What an amazing moment to be a part of!

Watch all three videos below and let us know what you think!

(On the Instagram post, touch the right side of the screen to move to the next video.)