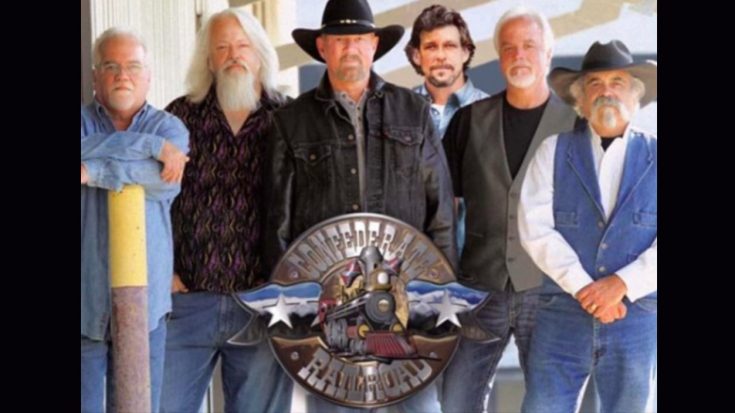 In July, it was announced that the Du Quoin State Fair in Illinois canceled country band Confederate Railroad’s appearance. Fair manager John Gross cited the band’s name and logo with Confederate flags as the reasons, saying, “While every artist has a right to expression, we believe this decision is in the best interest of serving all of the people in our state.”

The Ulster County Fair in New Paltz, New York later made the decision to remove Confederate Railroad from its lineup for the same reasons.

I have played the @DuQuoinFair many times over the decades … however, I must say that canceling @ConfederateRR JUST because their name is CONFEDERATE RAILROAD is a crock of crap!!! These are good men singing good songs… God please help us all … pic.twitter.com/EG32tCPbMC

The band, which has been around for over 30 years and has created hit songs such as “Queen of Memphis” and “Daddy Was Never the Cadillac Kind,” says they have never preached hate.

Danny Shirley, Confederate Railroad’s lead singer, told Rolling Stone in an interview that he has never viewed the Confederate flag as a symbol of hatred. Rather, he views it as a show of pride for the South.

“We were taught that flag means you like the part of the country you come from. And like I’ve said in other statements, I will not apologize for liking the South. I love it here,” he said.

In that same interview, Shirely also said the band “would never” consider changing its name, despite the recent controversy.

After losing two gigs due to their name, Confederate Railroad’s singer tell us what he’s learned from the controversy: “A lot of this is blown out of proportion” https://t.co/8Han0AlXa0 pic.twitter.com/e82GIKIRj2

Even though the Du Quoin State Fair canceled Confederate Railroad’s show, the band just revealed through a statement on its official Facebook page that the fair still tried to pay them “in full” for their performance.

The statement includes a personal message from Shirley, who said the band wondered what to do with the money, and came to an agreement:

However, the band claims that on July 19, the fair sent them “a multi-page conditional legal release in order to obtain that payment.”

While Shirley did not reveal what the legal release said, it clearly upset him and the other band members. After reading it over, the band couldn’t justify accepting any payment from the fair:

“After months of being referred to as promoters of hate and racism, without one individual stepping forward to cite any such personal occurrence – ever- and 30 years of performing to the contrary: I simply cannot and will not accept this money that requires their conditional Settlement Agreement and Release. Hopefully, they will be guided to put that money back into the region, as we intended to do,” Shirley said.

Shirley ended his statement with some words of thanks for the people of Southern Illinois, saying, “your words of encouragement are deeply felt.”

Despite the two cancelations they had to deal with this year, Confederate Railroad has maintained a busy schedule. They still have dozens of shows on the books for the rest of 2019, so fans will have plenty of opportunities to watch them sing classics such as “Daddy Was Never the Cadillac Kind.”