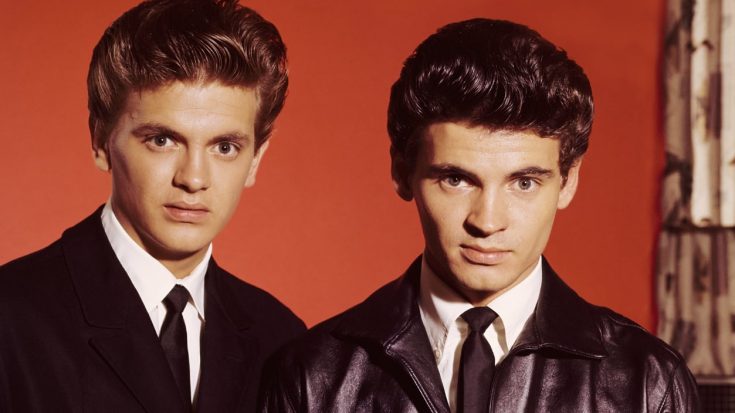 Nearly 60 years after this song was a No. 1 super hit for the iconic musical duo, The Everly Brothers, one of the siblings is stuck in a legal battle with his late brother over who is the writer of the song.

The Everly Brothers, comprised of siblings Don and Phil Everly, were known throughout the world for their seemingly-endless string of hits and insurmountable stage presence. They charted hit songs across multiple genres including pop, country, R&B, and more.

The lawsuit (according to Billboard), which has roots stemming from a 1980 agreement between Phil and Don, has now proceeded to a point where Don and his late brother’s estate are at odds over the ownership of a 1960 song – and the highly-valuable royalties that come with songwriting credit.

“Cathy’s Clown” which was a No. 1 pop hit for The Everly Brothers also became a No. 1 country hit for Reba McEntire and even was listed as the most-performed country song of 1989.

Originally, both brothers were credited as co-writers which is a very common practice for bands. The Beatles are one of the most notable examples of shared writing credits. In more recent decades, it has become common practice to ink an agreement about ownership rights early in the process, but in the ’60s it was a very different time.

In 1980, Phil Everly signed over “all of his rights, titles, interests, and claim[s]” to “Cathy’s Clown” to his brother Don. The writing credits for Phil were removed from all publications, databases, and documents.

The owner of the Everly Brother’s songs was Sony/ATV after they purchased the original Acuff/Rose publishing catalog.

Don filed to recapture full songwriting credit from Sony/ATV in 2011. Just after Phil died in 2014, his estate filed for recapture as well. Now, the two are in a legal battle to try and determine who has rights to the song.

Don’s lawsuit claims that Phil had fully exited ownership when he relinquished his rights in the 1980 agreement, but Phil’s estate disputes that.

A court has ruled that the statute of limitations has expired for Phil’s claim since he had not challenged Don’s continued public claim as the sole writer in the years that followed the 1980 agreement.

“If your name’s been left off a song by accident and liner notes come out, you’ve got an obligation to speak up or forever hold your peace,” said Don’s attorney, Linda Edell Howard.

Phil’s Estate’s attorney, Jay Bowen, says that they plan on seeking a reconsideration.

Watch The Everly Brothers perform “Cathy’s Clown” below and let us know what you think of this whole situation.