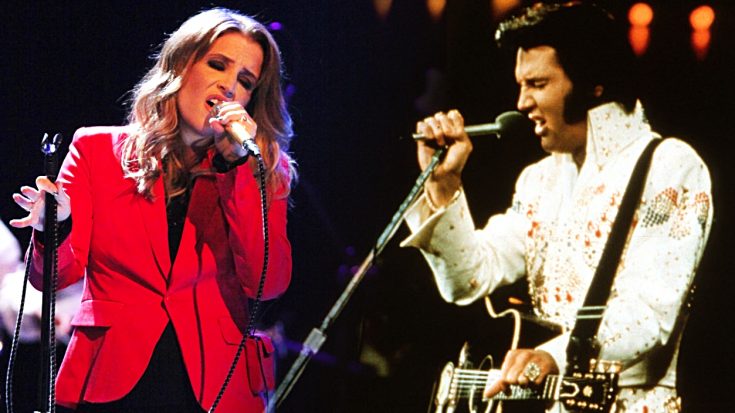 Released as a pre-launch track from Elvis Presley‘s new posthumous album of the same name, “Where No One Stands Alone” is one of a few rare tracks that feature both Elvis and his daughter, Lisa Marie Presley, singing together.

The song, which is a beloved country gospel tune, has been released by Elvis before – but it was just a solo version from his 1967 LP, How Great Thou Art. This new album features a stunning tracklist and is a beautiful reminder of Elvis’ love of gospel music.

Weeping in car. (Hubby driving I promise) exquisite harmony only family can do. Thinking how Elvis would have been thrilled to sing with Lisa Marie. And the power of No One Stands Alone is remarkable. Tears and chill bumps.

Upon the release of this remarkable new duet, fans all over the world were moved to tears by the sheer beauty that rings out when Lisa Marie harmonizes with her late father.

Many of you may be thinking that a duet between the two talented Presley’s would be impossible since he passed away when she was just nine years old. Thanks to the wonders of modern technology, sound engineers and producers were able to pull the original master vocal of Elvis’ recording and create a brand new track with Lisa Marie singing alongside her daddy.

I’m so excited to share ‘Where No One Stands Alone,’ an album I’ve co-produced celebrating my Father’s love of gospel music. This was the music he was most passionate about. He was so at peace singing gospel songs. I’m especially blessed to have duetted w/him on one of the songs. pic.twitter.com/yNswTjCRXK

Famous record label RCA will release the full album on Friday, August 10th, 2018 and have already published a stunning new lyric video to pair with this chillingly-beautiful track featuring Lisa Marie and Elvis.

“It was a very powerful and moving experience to sing with my father,” Lisa Marie Presley reveals inside the album notes. “The lyrics speak to me and touch my soul. I’m certain that the lyrics spoke to my father in much the same way.”

Take a minute and watch this amazing video of Elvis’ time with Lisa Marie and listen to their irresistible and tear-jerking harmonies as they sing “Where No One Stands Alone.”