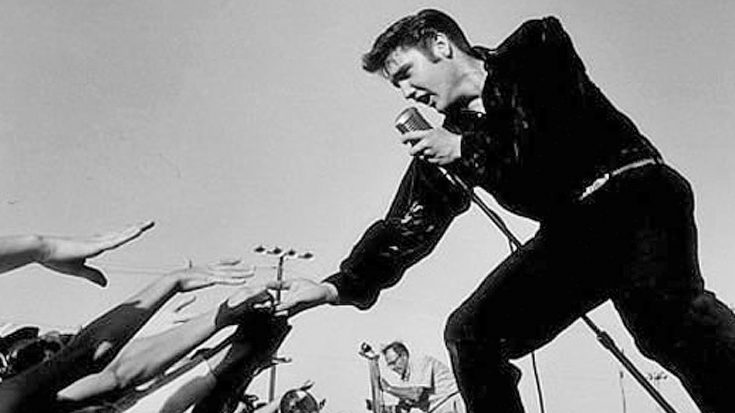 Elvis Presley was a specimen unlike any other. Before he even sang a single note, he made women go weak at the knees!

During this rare recording of Presley performing on The Milton Berle Show in 1956, he pulled out all of his signature moves while singing “Heartbreak Hotel.”

The women lost it during the musical break when Presley started dancing, and we certainly don’t blame them. Not only could he move unlike any one else, he proved his vocal talent is just as impressive as his stage presence.

“Sun lights up the daytime, moon lights up the night, I light up when you call my name and you know I'm gonna treat you right.” #MusicMonday http://bit.ly/ShopElvisMusic

“Heartbreak Hotel” was released on January 27, 1956 and quickly became Presley’s first single to reach national attention. It achieved unheard of feats when it reached the Top 5 of the Country and Western, Pop, and Rhythm and Blues charts all at the same time.

Although it’s considered a mournful pop song, “Heartbreak Hotel” is most definitely a blues tune, with biting lines like “the bellhop’s tears keep flowing / the desk clerk’s dressed in black‘, and ‘so lonely I could die.”

The song was inspired by a newspaper article that was written about the suicide of a lonely man who jumped from his hotel room. This is one of Presley’s most covered hits; Merle Haggard, Willie Nelson, Billy Joel, and Lynyrd Skynyrd are just a few of the noteworthy remakes.

The song changed music as we knew it. John Lennon once said that when he first heard “Heartbreak Hotel,” he couldn’t make out what was being said.

“It was just the experience of hearing it and having my hair stand on end,” he said. “We’d never heard American voices singing like that. They always sang like Sinatra or enunciate very well. Suddenly, there’s this hillbilly hiccuping on tape echo and all this bluesy stuff going on.”

According to The Telegraph, Paul McCartney said that Presley “sings it as if he is singing from the depths of hell. His phrasing, use of echo, it’s all so beautiful. Musically, it’s perfect.”

Check out this historic 1956 performance of the track below!