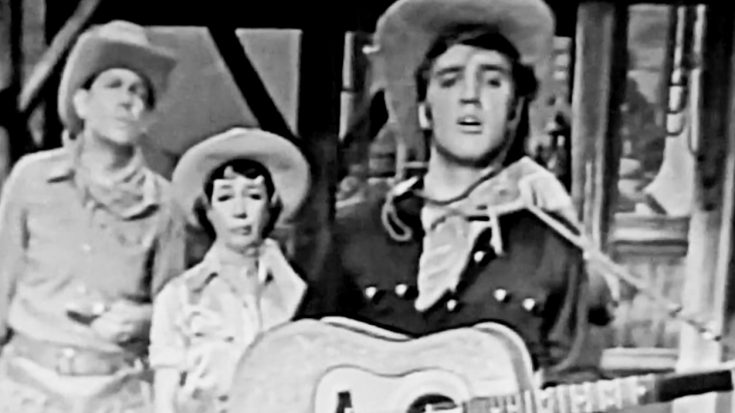 Television host Steve Allen was not the biggest fan of rock and roll when it first became popular. And as a result, he wasn’t all that fond of Elvis Presley‘s and his music, which helped popularize rock and roll as a genre.

Still, Allen couldn’t ignore Presley’s overwhelming popularity, and had him appear on The Steve Allen Show in 1956. That’s when Presley infamously donned a tux and sang “Hound Dog” to a real-live Basset Hound, which he did at Allen’s request.

At another point in the show, Presley appeared in a sketch that had Allen poking fun at yet another genre of music…country and western. As a jazz lover, Allen really wasn’t a fan of other musical styles, and made his least favorite genres the butt of jokes.

Dressed as cowboys, Allen and Presley were joined in the sketch by a “gang” of other country folks, who were played by some pretty famous faces. A feisty gal named Cactus Coca was played by comic actress Imogene Coca, while a cowpoke named Rattlesnake Griffith was played by none other than actor and comedian Andy Griffith.

Still a rising star in the celebrity world at the time, Griffith was four years away from the debut of his self-titled sitcom, The Andy Griffith Show.

So when he appeared on Steve Allen, he was simply known as a Broadway star with a hit spoken-word record.

The skit shows why Griffith went on to be regarded as one of the funniest fellas in showbiz, as he proudly stands up and introduces himself as “The dumbest cowboy you ever seen!”

It only gets more ridiculous after that, as the country quartet goes on to try and promote a “Tonto Bar” candy bar. Presley delivers the best line about the sweet treat, saying, “Dentists recommend Tonto Bars, because tests prove that Tonto Bars cause more cavities than any other candy bar.”

The four then start singing a silly Western-style song, which Coca ruins when she steps up and tries to steal the show for herself. After getting her to stop, the gang finishes out the rib-ticklin’ song and also throws a little bit of dancing in for good measure.

Overall, the sketch is seven minutes of pure comedic gold. Luckily, its footage was persevered and has been posted online, so y’all can check it out in the video below.

Be prepared to laugh your head off, because the whole thing is funny from start to finish! Who ever knew that Griffith and Presley could be such comedic partners?