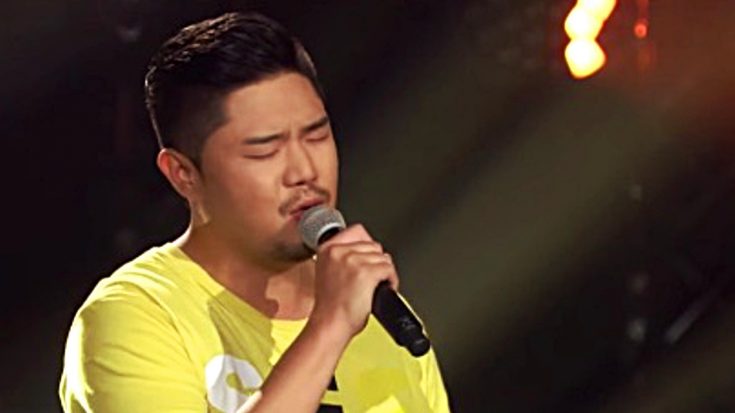 When it comes to television competition shows, The Voice reigns supreme, and not just in the United States. The show has iterations in a number of other countries, including Germany.

Just like in the U.S., those who compete on The Voice of Germany earn a spot on the show by performing a blind audition in front of a panel of coaches.

While the show is filmed in Germany, it isn’t at all unusual to hear the contestants sing American songs. It’s also not unusual for them to sing in English either.

One contestant named Dae-On Jung aimed to impress the coaches with his performance of an American classic. He selected “Desperado” as his song, which was originally recorded by the Eagles.

Despite the fact that “Desperado” was never released as a single, it went on to become one of the Eagles’ most popular songs. Rolling Stone even went so far as to name it to a spot on its 500 Greatest Songs of All Time list in 2004.

“Desperado” has long been connected to the country music community, as many country artists have covered it. One of the most notable renditions came from Clint Black, whose version peaked at the 54th spot on the Hot Country Songs chart.

Other than Black, other familiar names who have recorded “Desperado” include Linda Ronstadt, Johnny Cash, and the Season Ten winner of The Voice in the U.S., Alisan Porter.

Now, Jung can add his name to the long list of singers who have recorded notable renditions of “Desperado.”

Jung’s performance instantly perked the ears of the coaches, who seemed mesmerized by his performance. It wasn’t long before he got a couple of them to turn their chairs, which prompted enthusiastic cheers from the crowd.

Smooth and effortless, Jung’s performance held an enchanting power over all who watched. He made it clear that he has the talent to perform, even under some of the most nerve-racking of circumstances.

You can watch Jung’s impressive performance of “Desperado” in the clip below. We’d say he did the song justice, wouldn’t you?