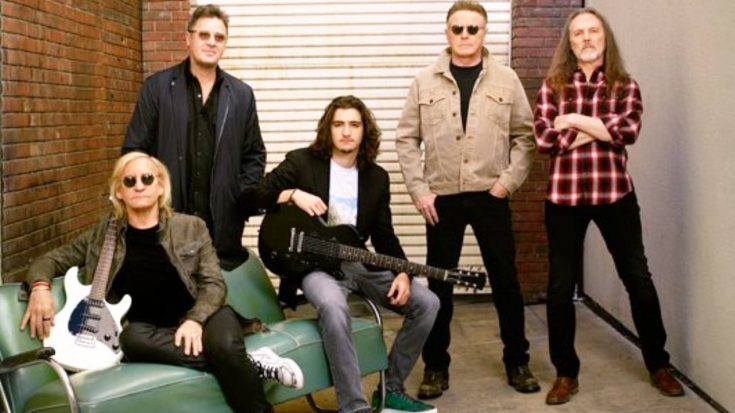 After Glenn Frey passed away in January 2016, fans of the Eagles were left wondering what the band would do moving forward. Instead of hanging up their guitars, the band decided to continue performing with two new members, Glenn’s son Deacon Frey and Vince Gill, taking his place.

Glenn sang lead on several of the Eagles’ songs including “Take It Easy,” “Peaceful Easy Feeling,” and “Lyin’ Eyes,” just to name a few, so the band had to re-work those. Vince took over lead vocals on “Lyin’ Eyes” and his soft, tenor voice is perfect for it with Deacon, Don Henley, Joe Walsh, and Timothy B. Schmidt singing beautiful harmonies.

Even before he officially joined The Eagles, Deacon had performed with his father. Watch a 2010 performance below.

In recent months, the Eagles have been promoting their upcoming Hotel California 2022 Tour. The verbiage they used on Facebook was, “The EAGLES – Don Henley, Joe Walsh and Timothy B. Schmit, with Vince Gill – are returning to the MGM Grand Garden Arena in Las Vegas on Saturday, May 28.”

This particular post, made on March 24, left fans wondering about a name that was left out – Deacon Frey.

On Wednesday (April 6), the Eagles made an announcement that clarified everything…Deacon Frey is leaving the Eagles.

“Deacon Frey has devoted the past 4½ years to carrying on his father’s legacy and, after some weeks of reflection, he now feels that it is time for him to forge his own path,” the post read. “We understand, completely, and we support him in whatever he wishes to pursue in the years ahead.”

The post continued, “In the wake of his dad’s demise, Deacon, at age 24, did an extraordinary thing by stepping from relative anonymity into the very public world of his father’s long illustrious career. We are grateful to Deacon for his admirable efforts and we wish him well as he charts his future. Deacon’s Eagles Family will always be here to surround him with love, support and goodwill, and he is always welcome to join us onstage at any future concerts, if he so desires.”

The band encouraged their fans to wish Deacon the best in the next chapter of his life and career.

Watch Deacon sing “Peaceful, Easy Feeling” with the Eagles below.