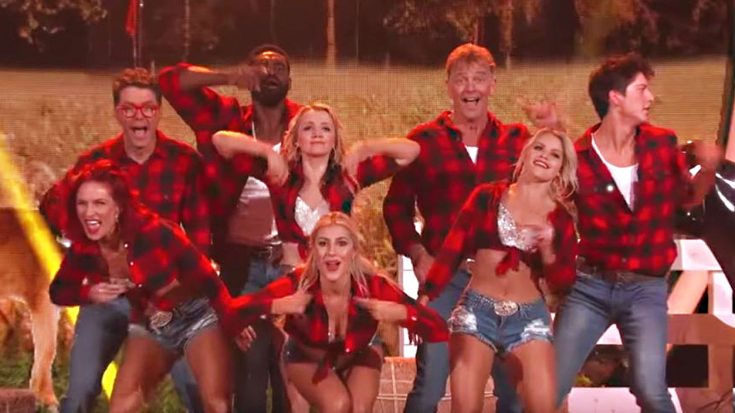 On Season 27 of Dancing With The Stars, they added a bit of a twang to the competition with a country-themed night. The duos faced-off to live performances from country stars themselves including Lauren Alaina and Carly Pearce. Although Country Night was a hit, the real hoedown wasn’t until the team dance-offs. Divided into two different teams, the contestants chose one country tune to get-down to; Bobby Bones’ team picking Dolly Parton‘s famous “9 To 5.”

Country Night was a particularly special night for Bones considering his tie with the country music world. Being that he was the team captain for his group dance team, Bones made no mistakes on who to chose; including Dukes Of Hazzard star John Schneider. Once he picked his team of dancing duos and a song to match, Team Hay Now was ready to giddy-up. Starting off the competition dancing to the iconic Parton song was only the beginning of their impressive number.

They’ve got two men who are influential in the country music industry! We’re excited to see what #TeamHayNow brings to this team dance battle. #DWTS

The stage was decorated to the nines with a farm-inspired background and props. The ladies were dressed in daisy dukes with cowgirl boots, red flannels, and bedazzled bras underneath. As for the men, they rocked their blue jeans with matching red flannels as well. From line-dancing to jumping on tables, the upbeat choreography matched the iconic tune perfectly.

#TeamHayNow was up first and they CRUSHED IT! What did you think? #CountryNight #DWTS

During the bridge, the scene changed as Schneider get the spotlight while doing his own two-step. Following, Bones and his partner, Sharna Burgess do their own line-dance across the stage. The group as a whole all worked really well together as they never missed a beat. Judge Bruno even called the group’s performance a “country triumph!” Our hats are off to Team Hay Now!

You’ve got to see this upbeat and fun performance of Dolly’s “9 To 5” below!