Donny Osmond Gets Real About Anxiety & His Career: “It Was Pretty Rough At Times” 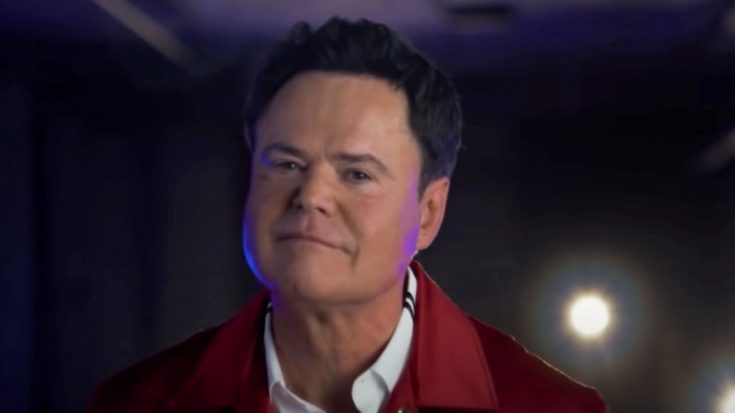 Donny Osmond‘s career has spanned across multiple decades, making him one of the most beloved and legendary figures in entertainment history. But despite his immense popularity, Osmond has been through his fair share of less-than-glamorous times.

In a post on Instagram, Osmond opened up about the anxiety he suffered during the earlier years of his career. While he did not know he was suffering from anxiety at the time, he knows now:

“Growing up in the music industry was not easy,” Osmond wrote. “I was under the public eye from a very young age and to be completely honest it was pretty rough at times. Like in anything in life, of course it had incredibly magical moments, but the lows were low.”

Osmond said the never-ending support he received from his family is what “saved” him during his darker moments. He encouraged others to reach out to their own support systems if they too, are in need of help:

“I was lucky to have such a strong support system to catch me when I needed it,” Osmond said. “…I remind you that it’s okay to seek help. You’d be surprised how many people are willing to be there for others. Never forget you are loved and appreciated.”

Osmond opened up further about his struggles during an interview with Yahoo! Entertainment. He spoke about his years as a teen idol, when he exploded in popularity following the release of his solo song, “Puppy Love.”

“It was… euphoric to hit the stage and all these thousands of girls were screaming your name. What guy wouldn’t want that?” he said.

But as Osmond grew older, so did his fans. As his fans outgrew him, Osmond began to worry about the future of his career:

“I can’t find the words to tell you what the feeling was of being rejected after selling out stadiums and all this stuff, and then playing half-filled high school gymnasiums. I mean, it’s just horrible,” he said.

This era of his career is when Osmond recalls experiencing anxiety for the first time. Even after Osmond experienced a resurge in popularity during the 90s, the anxiety remained

Osmond recalled a moment when he had a panic attack right before he was set to step on stage in his starring role in Joseph and the Amazing Technicolor Dreamcoat:

“They called half hour to show time,” Osmond remembered. “My hands started getting clammy. Fifteen minutes to show time, they announced, and I started shaking. Finally, about 10 minutes before the show, I’m throwing things in my dressing room. I said, ‘Get the understudy…get him ready, cause I can’t go on stage.“

Osmond’s wife helped calm him down backstage, and he went on to star in the show as planned. He said it ended up being “the best show” he had ever performed.

Now, 63-year-0ld Osmond is still going strong. He has a new solo residency in Las Vegas and just released a new album, titled Start Again. You can enjoy one of his new songs in the video below.