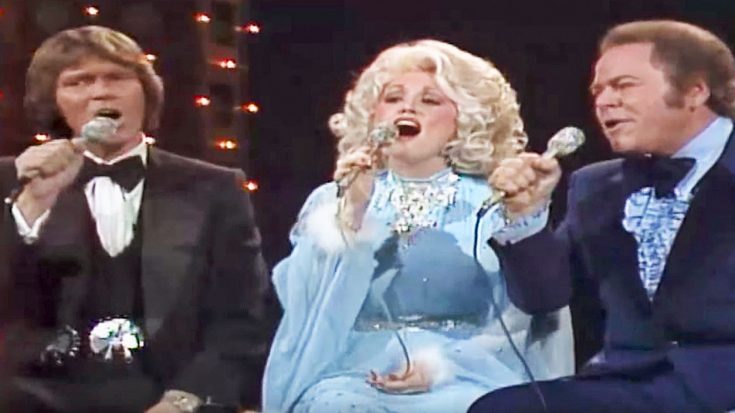 In the short time he was on this Earth, Hank Williams managed to make more of an impact on country music than he likely ever imagined. Over the course of his career he took eight songs to the top of the Country & Western Best Sellers chart and had 30 more climb into the top ten.

Posthumously, Williams had three additional singles top the charts and five others claimed spots in the top ten.

After his passing, Williams’ talent was recognized through his induction into several halls of fame, the first being the Country Music Hall of Fame in 1961.

His Voice Lives On

Decades after he left this Earth, Williams’ songs are continuously referenced as some of the best material country music has ever seen. As a result, many artists have stepped up to offer their own takes on Williams’ songs.

Back in 1978, three country stars came together to sing some of Williams’ most recognizable songs as part of an extensive tribute. Those three stars were Dolly Parton, Glen Campbell, and Roy Clark, who all went on to establish legendary careers of their own.

But as they sang together on that day in 1978, it was all about celebrating one person’s legacy…Williams’.

A Medley Of Hit Songs

The trio sang a marvelous medley of his famous hits, including “I Saw the Light,” “Hey Good Lookin’,” and “Your Cheatin’ Heart.”

The three country greats took turns singing different songs, but also sang together on a couple of them. A standout moment in the medley was when the three joined together on an upbeat rendition of “I Saw the Light,” which only got more fast-paced as the song continued.

An equally peppy performance of “Jambalaya” concluded the medley. But in all honesty, we never wanted it to end!

Luckily we can watch the medley as many times as we want, and you can too! Check it out in the video below.

Which one of the songs featured in the medley is your favorite of Williams’? We’d love to hear from you!