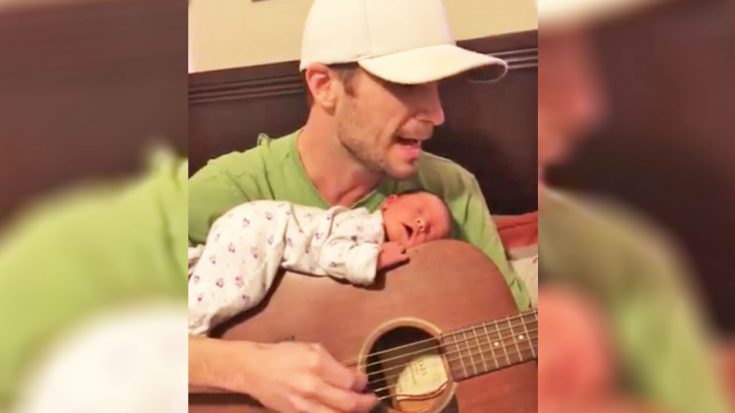 There’s nothing quite as precious as a father’s love for his baby. From the moment they are born, father’s take on the role of the protector and the mentor. But one dad, in particular, has a different way of spending quality time with his newborn than most…

Ben Moseley of Alabama and his wife welcomed their baby girl, Natalie on March 8. The Moseleys were more than excited to add their fifth member to the clan, completing their family. Although it’s only been a couple of weeks in the world for baby Natalie, it appears she is already a daddy’s girl.

Ben posted a video of him playing the guitar with his baby girl laying right on top of it. As he sang a sweet Tom Petty ballad, “Alright For Now,” Natalie laid peacefully in awe of her dad’s vocals. He quietly sings to her as she sways in and out of a sleepy daze. The song was the perfect fit for the occasion,

“Goodnight baby, sleep tight my love. May God watch over you from above.”

Turns out Ben is actually an artist outside of his lullaby life as well. His band, Ben Moseley & The Contraband have been playing together for quite some time now. The group plays gigs at local bars and venues even including weddings! Ben is the lead singer with three of his buddies, Chase Arrington, Ryan Byrd, and Brad Hardin filling out the group with their musical talents.

Posted by Ben Moseley & The Contraband on Thursday, November 2, 2017