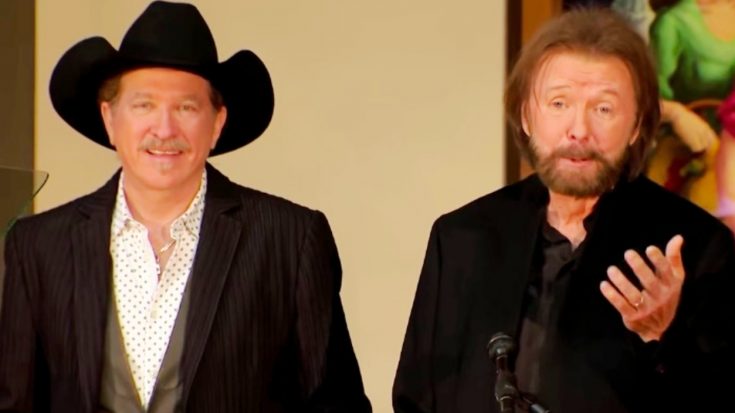 The Duo Members That Hardly Knew Each Other

20 years…that’s how long Brooks & Dunn‘s initial run as a duo lasted before they broke up and “retired” in 2010. In those two decades, the duo accomplished an impressive amount of things.

Just a short list of their many achievements include:

Today in 1993, @Brooks_Dunn set a career record AND a country music record with their debut album: https://t.co/5F95jqzupx pic.twitter.com/r9wUw2dfyv

With stats like those, it’s understandable why people were taken aback when Brooks & Dunn announced they were retiring. But if they only knew about the duo’s surprising history, the news of their breakup may not have come as such a shock.

Kix Brooks was 36 and Ronnie Dunn was nearing 40 when they met for the first time. Yes, that’s right, the two men who made up Brooks & Dunn weren’t childhood best friends or longtime buddies. Instead, they were two solo country singers trying to make their way in the world who got together for a writing session at the encouragement of music executive Tim DuBois.

It was after that writing session that the two total strangers were paired up to release their first song as a duo. They still hardly knew each other when their debut single, “Brand New Man,” hit radio.

To the shock of Dunn and Brooks, that song climbed to the top of the country chart. The following three singles, “My Next Broken Heart,” “Neon Moon,” and “Boot Scootin’ Boogie,” accomplished the same feat.

Their debut record, Brand New Man, reached the third spot on the chart, and is still their highest-certified album to date.

Suddenly, the two singers who had been complete strangers were sitting at the top of the country music world.

Super congrats to my old buddies Ronnie and Kix for learning today that they are being inducted into The Country Music Hall of Fame. #brooksanddunn #cmhf #nashville #countrymusic #bootscootinboogie #tennessee #nashvillelove #nashvegas

As time passed, bringing more hit songs and albums, Dunn and Brooks developed the friendship that many country music fans likely believed they already had for years prior. In an interview with CMT before their retirement, Dunn told the outlet that the two of them “ended up more like brothers,” by the time their run was through.

But as is the case between any brothers, there was a bit of tension. While everything seemed fine on the surface, fans had no clue that the members of their favorite country duo were itching to spend some time apart.

In an interview with Music Row, Brooks said that he and Dunn never forgot about their solo careers before they were thrown together in Brooks & Dunn. The passage of time left them anxious to revisit those careers and explore their individual passions.

So while there was no drama or fighting, Brooks said it quickly became clear the two of them needed to go their separate ways.

“Ronnie evolved as a dynamic singer. For me, did I really want to be a side guy playing guitar? I had always had bands growing up. Obviously from a success standpoint it was extremely rewarding, but at some point it comes with so many compromises you step back to question, what am I really doing here?”

In 2010, the members of Brooks & Dunn were finally free to be themselves again, 20 years after they released a song with a complete stranger.

Where They Are Today…

Dunn and Brooks explored their solo careers and also pursued other passions. Brooks started hosting a radio show and released a cookbook, while Dunn refined his skills as a photographer.

Then in 2015, they got a call asking if they’d like to join their longtime friend Reba McEntire for a residency in Las Vegas. The two had never thought of getting back together as a duo, but the opportunity seemed too good to pass up.

Five years after their breakup, a refreshed Dunn and Brooks came back together as Brooks & Dunn once more.

The residency continued for many years, and sparked a renewed interest in Brooks & Dunn’s music. It also seems there is no end in sight for the duo’s reunion, especially after they released a brand-new album in 2019, their first in 12 years.

Titled Reboot, the record includes updated versions of the pair’s biggest hits with featured vocals from modern stars such as Kacey Musgraves and Luke Combs.

As if that wasn’t exciting enough, it was revealed that Brooks & Dunn would be the 2019 “Modern Era” inductees into the Country Music Hall of Fame. Both Dunn and Brooks were present at the inductee announcement ceremony.

“It hasn’t soaked into me, and it probably will. Sometime, when I’m off by myself, I’ll have an emotional moment, I’m sure,” Dunn said with tears in his eyes, while an equally teary eyed Brooks looked on.

Looking at the two of them standing there on the HOF inductee announcement day, it’s hard to believe that Dunn and Brooks didn’t even know each other 30 years ago. But fate brought them together, and led them both to unprecedented success they previously only dreamed of.