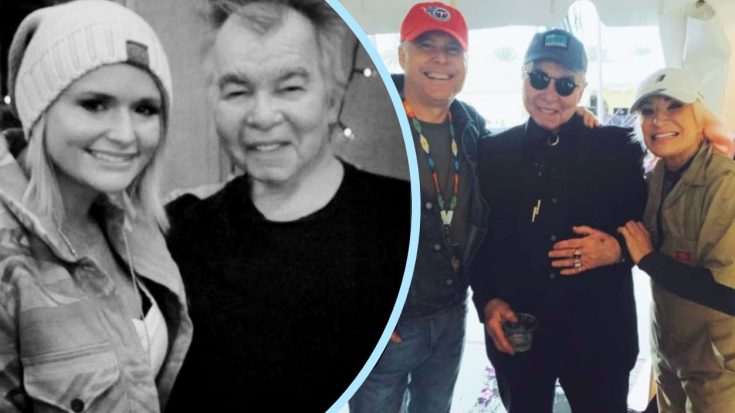 The past few weeks have been tough for country artists and fans.

Kenny Rogers passed away on March 20 of natural causes at the age of 81. Then, just nine days later, Joe Diffie passed away due to complications associated with coronavirus (COVID-19). He was 61.

Now, we have lost yet another country great to the virus. We lost John Prine.

On the same day that Diffie passed away (March 29), John’s family issued a statement indicating that he was hospitalized three days prior (on March 26) after developing “a sudden onset of COVID-19 symptoms.”

John’s wife, Fiona, had previously revealed her positive COVID-19 diagnosis on March 17. John was tested at the same time, but his test came back “indeterminate.”

Unfortunately, John went on to contract COVID-19 as well, and was in critical condition at the time his family issued their initial statement.

Fiona continued to provide updates, telling fans John was “stable,” but not better. Her last update on his condition came on April 2, which was his 8th day in the ICU.

“He is very ill and yet I remain hopeful that he can continue to fight this devastating virus and come home where we can care for him,” she said.

But John never got to come home. He passed away on Tuesday (April 7) at the age of 73.

John was an incredibly influential figure in the music industry, and touched the hearts of all who meet him or listened to his music. Numerous country artists, venues, and organizations reacted to his passing with touching tributes on social media.

You can see some of those tributes below.

The Country Music Hall of Fame

“Made from a mold now broken, John Prine was a walking, grinning argument for human beings as a pretty good species. In John's songs, humor and heartache dance together like Fred Astaire and Ginger Rogers. His words and melodies draw chuckles and blood, and tears of sorrow and redemption, all leading to truths widely known but never before articulated. John's mind was a treasure chest, open to us all. We mourn his passing, even as we hold the treasure.” – Kyle Young, CEO

It hurts so bad to read the news. I am gutted. My hero is gone. My friend is gone. We’ll love you forever John Prine.

My dear @amandapearlshires talked John into writing these down for me Christmas 2018. We’ll miss him every day.

The greatest night of my life, just sitting there on the same stage as John. Not enough words to really convey what this man’s music means to me. I feel blessed to have been on the planet at the same time as John Prine. RIP.

There will never be another that even comes close. Fly high John Prine, you’ve always been an angel.

Saddened tonight by the loss of legendary songwriter John Prine …

? I was just with John Prine in Florida at 30A Songwriters Festival. People stayed in the blowing rain and his guitar was getting soaked. So I ran out and started wiping his guitar down and then his shoes. John eventually realized it was me! We sang Angel From Montgomery together. My mind went back to 1978 when I recorded it on the TNT album. I asked John to sing harmony. He said, "I can’t sing harmony," but he did and it was great back then in 78. And it was great in Florida that day in the rain. Backstage, I introduced my boyfriend Craig, on the left, to his beautiful wife Fiona and John. I keep going back to those precious memories. I will treasure what little time we all got to spend together that day. My heart bleeds for my birthday buddy. We pinky swore that we were gonna celebrate our birthdays Oct. 10 together this year. My prayers go out to Fiona and the entire family. #restinpeace

So sorry to hear about the passing of John Prine.
Singer, performer and song writer extraordinaire.
Rest In Peace Sir, you will be remembered and missed.

Our hearts are broken upon hearing the news of John Prine’s passing. Mr. Prine brought joy & music to countless fans in the pews over the years. We will miss him terribly. Our staff adored Mr. Prine and send our deepest condolences to his family at this difficult time. ♥️ Photo: Steve Lowry/Ryman Archives

We consider ourselves lucky to have had a front row seat to John Prine’s incredible talent. From gracing the Opry House stage for those memorable New Year’s Eve shows to other special Opry appearances including one alongside the SteelDrivers and Bill Murray, he has touched our hearts with the music he’s given us. We are thinking of his family and friends tonight. ❤️

Just give me one thing I can hold on to. I'm just heartbroken. #johnprine

When I was a young boy. My daddy would sit on the edge of the bed and play his songs, one after another. I used imagine my Grandpa was a Carpenter and I couldn’t wait to meet Dear Abby whoever she was. I learned to sing Please Don’t Bury Me when I was probably 5 years old. Waking up, putting on the slippers…walking in the kitchen…you know the rest. His songs were more visual than any book read to me or film I’d seen at that time. So vividly I can remember sitting there asking Daddy to play me one more before lights out. I’m so thankful my Pops had great taste in music. John Prine was at the top of his list. He shared that with his kiddos. Thank you Dad for that. Thank you John Prine for inspiring my dad and the rest of the world. Rest In Peace Songwriter. You left a huge mark on us. We will miss you. God Bless @John_prine

The great John Prine has passed away from the virus. He showed me how to “let it rip” when it comes to songwriting. There’s a huge hole in the music world tonight. John did it best. RIP. -T

My heart hurts learning that John Prine has passed away. He is singing with the angels. You will be missed but your songs will live on. ❤️

Rest easy, wordsmith. Forever you will live in your songs. Thank you for your infinite wisdom, subtle humor, and lyrical lessons. You will never be forgotten. @john_prine

Rest easy John. You’ll forever be in our hearts & songs. The world won’t ever be the same.

Lukas Nelson & Promise Of The Real

We are heartbroken to hear about the passing of John Prine. His life and music will be celebrated by us as long as we are able .. we send prayers and condolences to his family at this time.. ~ Lukas and POTR pic.twitter.com/nw72SDEjHq

Thank you John for sharing your love and light and music. You will always be in our hearts. I’m imagining John Prine songs are playing all around the world… Thank you Brother.

Another sad day and a huge loss. We had the honor of meeting Mr. Prine on a flight back to Nashville. This was the only time we’d ever met him. But, the little chat that we had on the flight was one we’ll always remember. He was so gracious and kind and took the time to talk shop with us for a while. Our hearts go out to his family and loved ones. RIP @john_prine you will be missed. But your music will live forever.

Mourning the loss of another legendary artist this morning. ? RIP John Prine.

Words can't even come close.
I'm crushed by the loss of my dear friend, John. My heart and love go out to Fiona and all the family. For all of us whose hearts are breaking, we will keep singing his songs and holding him near. @JohnPrineMusic

My thoughts and prayers are with John Prine’s family. What a legacy he left behind. We had the opportunity to share the stage several years ago at the @thistlefarms Love Letters fundraiser at @theryman and I will always cherish that memory.

Our hearts go out to John’s family and friends during this sad time. May he rest in peace.

Even though John is gone, his legacy lives on. Please remember him by watching him sing in the video below.