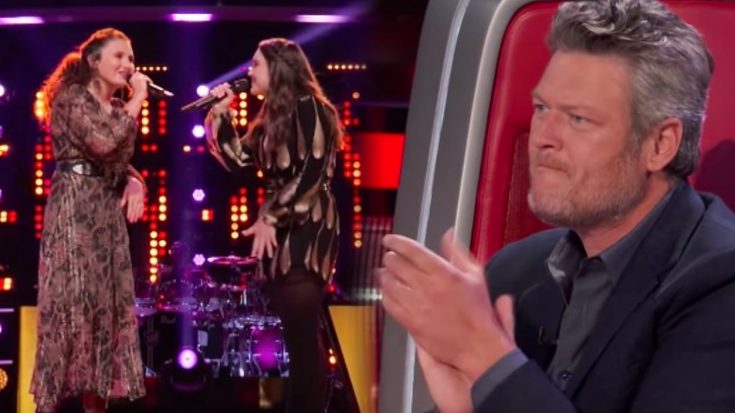 Season 17 of The Voice is moving along. The first few battle rounds aired on Monday night (October 14) and they showcased some extraordinary talent.

Team Blake‘s Josie Jones and Kat Hammock were two of the first artists to battle each other. They were tasked with singing a piece with deep roots in country music history…John Denver‘s “Take Me Home, Country Roads.”

Even though Denver was not a country artist by definition, “Country Roads” was labeled as a country song. The track hit the 50th spot on the Hot Country Singles chart and crossed over to claim the second spot on the all-genre Billboard Hot 100.

Even though “Country Roads” wasn’t a major country hit, it went on to become one of the most frequently covered songs in the genre. Decades after its release, “Country Roads” was recognized in the 2016 mega-mashup “Forever Country,” which also included Dolly Parton‘s “I Will Always Love You” and Willie Nelson‘s “On the Road Again.”

“Forever Country” became a number one country hit, and its music video went on to win an ACM Award. Its success led to renewed interest in “Country Roads,” and many more covers followed.

But Jones and Hammock’s version of “Country Roads” is unlike anything you’ve heard before.

There have never been two voices on #TheVoice as different as @josiebethjones and @kat.hammock. #TeamBlake

The two singers have drastically different voices, with Jones’ voice containing more power and Hammock’s voice being softer with a unique tone. Despite these differences, they made their voices blend beautifully whenever they sang in harmony.

As gorgeous as those moments were, their solos were the standout parts of the performance. These moments gave Hammock’s unique voice the chance to stand out, and allowed Jones the freedom to explore her extensive range.

The coaches heaped praise on both singers once the performance wrapped up. Though they all had the same thing to say…Hammock’s voice was undeniably interesting.

“I think Kat’s voice is more intriguing,” John Legend said, even though he admitted that Jones’ performance was better on a technical level.

Kelly Clarkson drew a comparison between Hammock and Alison Krauss, which is high praise indeed. She later commented on her voice, saying, “And it’s breathtaking. And it was like the most angelic thing I’ve seen ever on this show, it was so beautiful.”

Josie and Kat.. you two ladies both did #TeamBlake proud! #VoiceBattles

Gwen Stefani complimented the entire performance, saying, “I loved that. I just kept thinking of butterflies, and rainbows, and sunshine. It was such a pretty rendition.”

As for Shelton, he too recognized that Hammock has something special. He congratulated her for having such a unique sound, saying, “Because to be unique at this point in music, is impossible.”

In the end, Shelton chose Hammock as the winner of the battle. We can’t wait to hear her beautiful voice continue to grow and develop on the show!

You can watch Jones and Hammock’s “Country Roads” battle below. Do you think Shelton made the right choice?