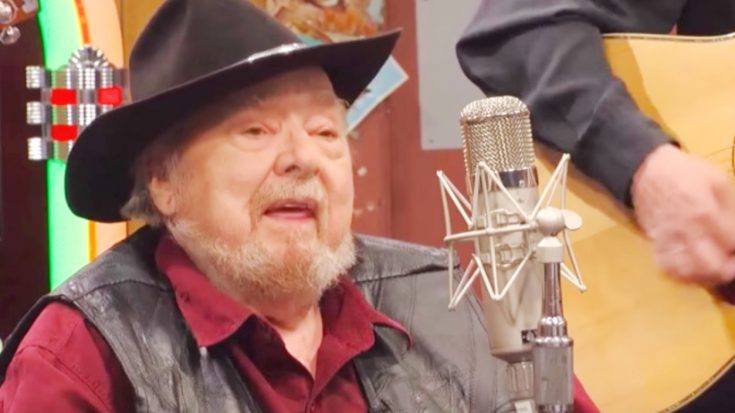 For some musical artists, retirement is something they never consider. Many of them start performing from a young age, and come to feel at home on the stage and in the studio.

So rather than retire as they enter their golden years, many artists just keep on entertaining until they take their last breath. That’s exactly what one of the most iconic figures in country and bluegrass music did.

His name was Mac Wiseman.

Wiseman’s musical career started at a young age, as he started playing instruments as a child. His talent was clear, which is why it wasn’t long before he earned a spot in the Foggy Mountain Boys, the iconic band that backed the equally iconic Bill Monroe.

After playing with Monroe in both the Foggy Mountain Boys and his other band, the Bluegrass Boys, Wiseman began to experience solo success. He was especially popular in the 1960s, when a revived interest in folk music resulted in successful shows at the Hollywood Bowl and Carnegie Hall.

In the midst of all that, Wiseman also co-founded the Country Music Association in 1958, and in fact, was the organization’s youngest founder.

Wiseman’s contributions to the country music and bluegrass communities were recognized with a number of high honors. He was inducted into the International Bluegrass Hall of Honor in 1993 and was a 2008 recipient of the National Heritage Fellowship honor from the National Endowment for the Arts,

To top it all off, he was inducted into the Country Music Hall of Fame in 2014.

Mac Wiseman will be inducted into the Country Music Hall of Fame tonight. #redcarpet #medallion pic.twitter.com/37AJRrCnG1

The Legacy Lives On

Wiseman was in his late 80s when he was inducted into the Country Music Hall of Fame, and lived just a little over four years after his induction. He remained active in the industry up until just a few weeks ago, when he experienced kidney failure and entered a rehab center, according to Bluegrass Today.

It was at that rehab center in Antioch, Tennessee that the man known as “The Voice with a Heart” passed away on Sunday (February 24) at the age of 93. He was the last living founder of the CMA.

We’ve just learned that Mac Wiseman, The Voice with a Heart, has passed on at 93 years old. Rest in peace, Mac. We miss you already. American music won’t be the same without you. // #BGS #MacWiseman #RIP #thevoicewithaheart (image via @tennesseannews)

As of press time, details concerning Wiseman’s funeral arrangements have not been announced. He is survived by his five children, Randy, Sheila, Christine, Maxine, and Scott.

Our prayers go out to Wiseman’s family, friends, and all who loved him as they mourn his passing. He may be gone, but his legacy and his music will always live on.