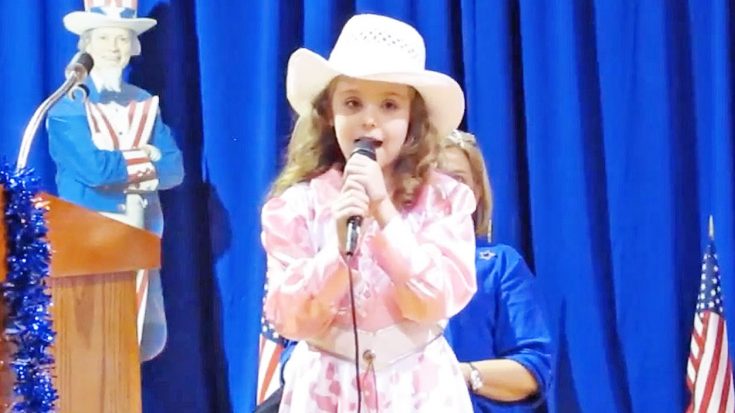 As proof of just how timeless Dolly Parton‘s music is, she has a whole bunch of young fans who were born decades after some of her biggest hits were released.

One such fan is a talented young girl named Anna Faith, and she’s being singing since she was just a little thing!

Anna has been performing in public long before her age ever climbed into the double digits. Within no time at all, Anna found herself being invited to perform at some pretty iconic venues, including the Kentucky Opry.

Anyone who browses through the YouTube videos of Anna’s various performances will quickly learn that she is an old soul in a youngster’s body.

Her taste in country music is distinctly classic, and she is known for her renditions of Willie Nelson‘s “Always on My Mind,” Tammy Cochran’s “Angels in Waiting,” and Dolly’s “Coat of Many Colors.”

Prepare To Be Dazzled

It’s her version of the latter song that we have to share with you here today! Filmed in 2012, Anna was only nine years old when she dazzled a crowd with her performance of Dolly’s beloved hit.

Anna went full-out for her performance, and dressed in the most “country” outfit you could ever imagine…a pink cow print dress with fringe, a shiny belt, and a full collar, all topped off with a matching cowboy hat.

But beyond her appearance, Anna went the extra mile to fully capture Dolly’s character before she sang “Coat of Many Colors.”

Rather than introduce herself by her real name, Anna pulled off her best impression of Dolly and introduced herself as the legendary singer. She gave a full rundown of Dolly’s life and legacy, making sure to mention her Dollywood theme park in Tennessee and her Imagination Library.

After her short introduction, Anna moved into a sweet-as-sugar performance of “Coat of Many Colors.” With no music playing to back her up, Anna confidently held the microphone in both hands and sang the song loud and proud.

Watching Anna perform that day, you’d never believe that she was only nine at the time. She presented herself with confidence and poise beyond her years, proving she has what it takes to become a big star one day!

Tune in below to catch Anna’s delightful performance of “Coat of Many Colors.” We wish her the best as she continues to chase her dreams!