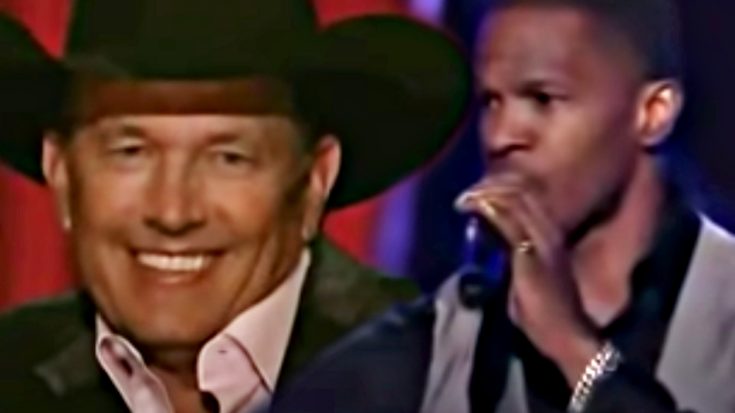 The multi-talented Jamie Foxx took to the stage to honor the King of Country Music in a CBS event called the “George Strait Special.” Foxx, being from a strikingly small town in Texas, described a time in his childhood when he attempted to snag a seat in a local venue that the legendary George Strait was performing at.

Being a dedicated fan of color, Foxx admitted that he was turned away, but still bragged for many years that George Strait came to his tiny town. Two years before this performance took place, Foxx and Strait met for this first time and reminisced about the time Strait was in Foxx’s hometown.

Foxx also stated that no matter what color your skin was, you could appreciate the sexiness in Strait’s song, causing The King to blush. Following his nostalgic memory, Foxx smoothly transitioned into a tribute performance of the classic “You Look So Good In Love,” gracing the audience with his vibrant vocals and impeccable range.

The Oscar-winner’s soulful approach to the country hit gave this melody a striking new sound that, although vastly different from the original, appeased the audience and received a much-deserved ovation!

Watch the tribute performance below.